A Fitting Tribute to Maas Ran 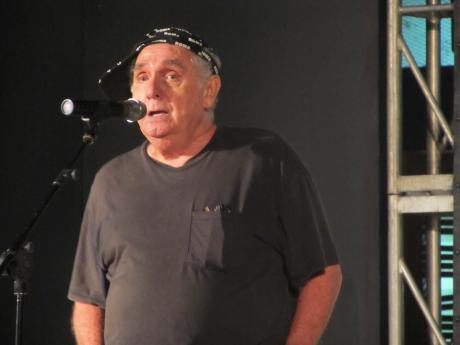 "The man was a genius. He was renowned for his timing. He was not just a fantastic actor, he was a fantastic standup comedian," Tony Patel said in making his contribution at a recent show dubbed 'Men

in Theatre: Tribute to Maas

Ran' at the Ranny Williams Entertainment Centre on Hope Road in St Andrew.

Patel was one of several acts spanning a wide variety of experiences on a show that saw performances of different modes interspersed with archived video presentation and a sample of Williams' written work performed by the National Pantomime Company.

Patel said he met Maas Ran when he was nine or 10 years of age, and later in 1966, worked with him on his first pantomime.

"It don't matter what Mrs Gloudon or whoever else wrote, Ranny made up his own lines, and you had to be on the lookout, because Ranny could change his lines from night to night. You never saw the same show twice," he said, before inviting the audience to listen to a rare hilarious audio tape of the popular Miss Lou and Maas Ran show.

While Maas Ran is usually associated with comedy, in Duvi Burke, Jean-Paul Menu and Christopher McFarlane, the audience got a glimpse of how he must have created and presented serious lines and roles.

But the comedians were not to be left out of a show celebrating the life of one of Jamaica's most illustrious comedians, and so they did. Volier Johnson, Munair Zacca, Christopher Daley, Donald Anderson and Jahlil Rainford had the audience, along with the towering projected image of the man of the moment, grinning from ear to ear.

Experienced actors like Johnson, who had worked with Maas Ran, recounted entertaining anecdotes, but young Rainford made an impression with a poem titled 'Liad Eddie'. The colourful and justly entertaining piece, tells of a young persona, his grandmother and a parrot called Eddie that had the fair-size audience laughing.

Daley and Anderson came bearing gifts of their own creative satires and Zacca, looking like a 'badman', performed Trevor Rhone's poem, 'I Ah Look Too'.

Maas Ran's affiliation with the Little Theatre Movement (LTM) is well chronicled, and so it was not surprising that the Chairman of the Movement, although a female, was on hand to give her remarks.

In addition to telling more anecdotes on the interesting story of Maas Ran, Barbara Gloudon also asked that the Ward Theatre (a place where Randolph Williams had made several appearances) be built up, and also announced that the LTM plans to build a museum.

'Men in Theatre; Tribute to Maas Ran' was organised by the Jamaica Cultural Development Commission (JCDC). It also saw a presentation of a citation from the Centre of the Arts Advanced Division, University of Technology to the JCDC. Associate vice-president of the centre, Hector Wheeler, made the presentation to JCDC Chairman Aston Cooke.

After the presentation, Wheeler explained to The Gleaner the thinking behind his institution's decision.

"We have an award that is called the President's Award for Culture and, some years ago, we actually awarded it to persons in drama, and Maas Ran was the recipient. It was given after his passing and we want a place that the citation could be displayed, and an appropriate organisation is the Jamaica Cultural Development Commission."

MC for the concert was Michael Nicholson.