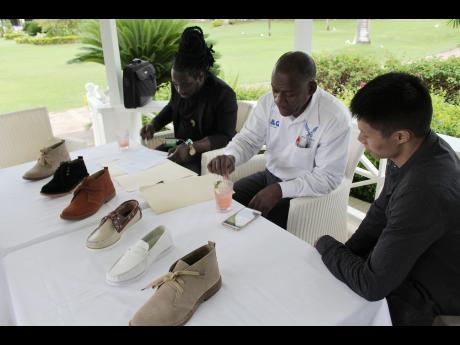 When you see reggae-dancehall star Byiome 'I-Octane' Muir these days, chances are he'll be wearing a pair of spanking-new Italian-made Golden Eagle shoes. That's because the in-demand, multi-award winning entertainer recently signed a dela as the official brand ambassador for the trendy footwear brand.

The signing, which took place recently at the Sunset Beach in Montego Bay, was a private affair attended by all the key players, including marketing agent Peter Plummer, along with I-Octane and his manager, Ray Alexander. Man-of-the-moment I-Octane was like a child in a candy store as he indulged himself by trying on several different pairs of Golden Eagle shoes in an effort to decide which pair to wear for the signing.

"I feel really good about endorsing this shoe brand," said a beaming I-Octane, who is also the brand ambassador for Digicel and Busta.

The shoes - which I-Octane emphasised "are the ultimate in comfort, fashion and style" - are available islandwide, and although relatively new to Jamaica, the brand has stamped its name throughout Asia, Europe and the Americas as a brand to contend with in men's fashion, since its inception in the mid 1980s.

"Golden Eagle selected some of the best fashion designers out of France and some world-renowned shoe designers and shoe engineers out of Italy to create and design our footwear to ensure style, safety, and durability," marketing agent Peter Plummer explained.

Golden Eagle, which was introduced to Jamaica in 2009, has its main store and headquarters at Sam Sharpe Square, Montego Bay. Over the years, the management has been approached by various agents of athletes and entertainers from the music fraternity, negotiating endorsements deals. One was never negotiated until now.

Meanwhile, I-Octane, who recently returned from a successful tour of Europe, is literally working hard in the studio. His latest dream project sees him building his own recording studio - Conquer The Globe - which, incidentally, is also the name of his personal backing band.

"Over the years, I have worked with various producers and at different studios, but the time eventually comes when you want your own. I am not saying that I won't be working with other producers in the business, because that would be arrogant, but having my own studio will enhance my creativity and give me more flexibility. Team I-Octane is ready to conquer the globe," he emphasised.