Nattoo’s Fragility – The sound of art 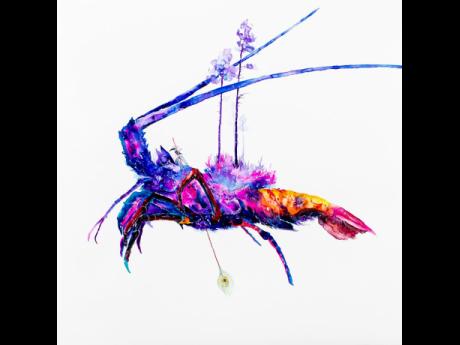 Last weekend, Richard Nattoo invited his peers to the Blank Space at the Trade Centre on Red Hills Road to see his art exhibition, Fragility, and to listen to the artwork’s accompanying songs. Along with the symmetrical, colourful presentation of large mythical animals and miniature human figures, the visual artist displayed all his creative sides, curating a 360-degree, immersive experience. He also presented Mr Nattoo – his musical persona playing in the electronic genre.

Fragility addresses Nattoo’s defiance against dark, internal feelings. His electronic music is defiant as well, serving as a challenge to the status quo and what constitutes as a distinctly ‘Jamaican’ product.

“People would see my art and say, ‘Why you don’t like to paint like Jamaicans or do stuff that looks more Jamaican?’ I’m a Jamaican; I’m in Jamaica. I’m taking my experiences and channelling them through my medium. So how does that not make it Jamaican if I’m doing it?” Natoo said, speaking with The Gleaner.

Nattoo works primarily with watercolours then mixes them with pen and ink. “In addition to that, I use iridescent paints. I paint on archival watercolour paper, or I paint on Japanese Yupo,” he shared. Yupo is a completely recyclable, waterproof synthetic paper made from extruded polypropylene pellets. No part of it is taken from any tree product. He recently began experimenting with glass pieces to create 3D sculptures, an impressive graduation for the unqualified fine artist.

“I didn’t go to art school. The only form of training I had was high school – CSEC and CAPE Art. Other than that, I kind of taught myself most of it. I did go to architecture school, and there were some art techniques and stuff that you had to understand, but no formal art school training. Architecture is my day job now. I guess I never really wanted to be an architect. Studying architecture helped me to resolve issues and acted as a training ground to strengthen the art and music. Art and music were always what I really wanted to do,” he revealed.

As in art, he also has no formal music training. Acquiring the FL Studio music production application while in third form at Ardenne High School was the gateway to his learning music. What resulted is an experimental expression that is uniquely Nattoo’s. “There are some jazzy, some hip-hop influences, with some other funk feelings. As a musician, it ties in with my art because ... my music is probably what my art would sound like,” he explained.

Fragility attracts the eyes with elements of mysticism that seem nearly cosmological. The exhibition he speaks of majestic depictions of animals - bulls, hummingbirds, seahorses, wolves hued in deep purple, blue, pink and other hues. Some of them depict these animals scaled to the size of giants, against their human counterparts.

Nattoo described his work, saying, “The animals look like giants (because they) represent different emotions. The reason behind having them on such a grand scale is just to say that our emotions are a lot bigger than we give them credit for. That’s why they have that mythical quality – because they’re really frozen feelings.”

While creating the work for Fragility, Natoo shared that he was in a ‘dark place’. “The art was a ladder that helped me to climb out of the space because there were a lot of feelings that I was trying to rectify and resolve. It actually helped me, so the art is for anyone who is in a dark place, for them to use it as a ladder to help resolve their feelings through my resolutions,” he said.

He added that the animals are used to explore emotions “because human beings are emotionally complex creatures – but a fox is always who a fox is, an owl is always an owl, a bull is always a bull – for the most part.”

And he sees all of his art as intertwined. “The music is a necessary component because it adds a balance to the exhibitions – a lot of my music feels like what I think my art would sound like.”

While he has been making visual art since he was four years old, the music bug bit when he entered Ardenne High School. His experience was that many people tried to put him in a ‘reggae box’.

“I was always more fascinated with the electronic sound. It seemed more unsafe and risky to me. It’s the same thing with my art. Working in the electronic genre gives me the freedom to experiment and to do what I really want to do – not what is expected of me. Now, I’m making music that I want to make.”

And his art influences his music. “There are a lot of things that are slow-moving elements within music, which tie back into slower moving elements in my art. When I have exhibitions and the music is involved, it creates a 360-degree experience. I’ve always wanted my work to be an experience. A person will forget what you tell them, what you do for them, but they won’t forget how you made them feel,” he added.