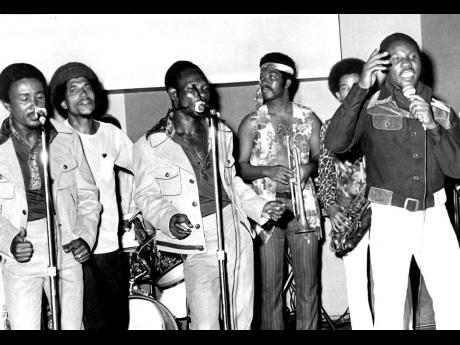 Gleaner photograph
Toots and the Maytals. 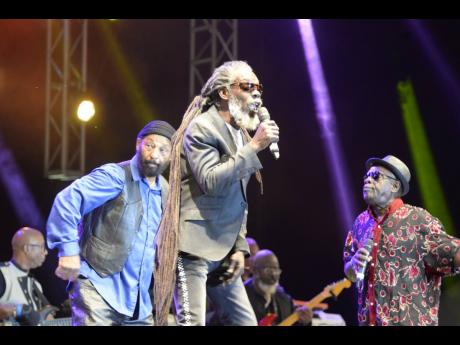 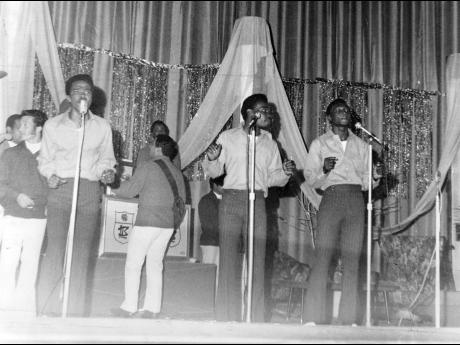 Gleaner Photographer
The Melodians backed by Byron Lee and the Dragoneers performing at the Regal Theatre at the Nuggets For the Needy 1969 Grand Gala show.
1
2
3

Group singing became a very dominant feature of early Jamaican popular music during the ’60s. The most popular was the three-part harmony type demonstrated by the groups The Wailers, The Paragons, The Techniques, The Melodians, The Jamaicans, The Gaylads, Toots and The Maytals, and The Heptones. They accounted for no less than 60 per cent of the hits that poured out of Jamaica’s busy recording studios – Federal Records, Studio 1, Treasure Isle Studios, Joe Gibbs Studios, and West Indies Recording Limited (WIRL), later known as Dynamic Sounds.

Many of the early artistes, although eventually turning to solo careers, believed that harmony was the most important ingredient in their music. The late Brent Dowe of The Melodians trio, for example, sacrificed his lead-vocal role for harmony on many occasions, because he felt it would enhance the sound of the group. In a 2005 interview with me, he said, “At the time, the whole emphasis was on harmony, not on the lead singer. Harmony was the thing. That’s why I had to sing in the background many times.” Dowe, however, sang lead on the stellar hits I’ll Get Along Without You, Lay It On, No Nola, The Rivers of Babylon, and Everybody Bawling – a Duke Reid-produced recording that highlights the plight of the poor and in which harmony is palpably felt as the group sings:

“Everybody bawling, they bawling for love

Their hands on their heads, not a money in their pockets

Nothing they do can change this kind of living”

Inspired by the Coasters’ Yakety Yak recording, the Jamaican Jiving Juniors included clown acts in their harmony in a kind of call and response lyrical exchange between bass man Eugene Dwyer and lead tenor Derrick Harriott. Performing from the mid-1950s, they were, perhaps, the first Jamaican vocal group to pay special attention to harmony.

The Wailers trio of Bob Marley, Peter Tosh, and Bunny Wailer displayed tight harmonies in their early recordings, which were primarily in the ska mould. Perhaps more than any other ’60s group, harmony, or ‘the sound they wanted,’ was of paramount importance to them. So when Junior Braithwaite and Beverley Kelso of the original quintet left via the migration route, and for personal reasons (respectively), they met upon what Bunny Wailer called “challenging times” in his CD Box set Musically Speaking. “It was difficult to cope with, especially Bev, because she also blended with Brathy as both their voices were high pitched,” Bunny Wailer recalled.

The group searched desperately to find adequate replacements to retain that special harmony and the quintet status that they dearly cherished. They even composed a track called Donna in tribute to Bev, trying to persuade her to stay, but it didn’t work. “We now had to be researching three membership groups and the Impressions were our firm choice. This desire had developed in us because of our respect and admiration of groups like Little Anthony and The Imperials, The Platters, Frankie Lymon and The Teenagers, and The Drifters,” Bunny Wailer explained.

This practice by Jamaican groups of covering American group-singing songs became widespread in Jamaican popular music during the ’60s and ’70s. The Impressions, The Four Tops, and The Temptations were the ones most imitated. Local acts like The Uniques, The Techniques, The Paragons, The Jiving Juniors, The Shades, The Wailers, and The Mighty Diamonds seemed to have benefitted most from the harmonies displayed by their foreign counterparts.

Commenting on his penchant for group singing and harmonious sounds, Tabby Shaw, lead vocalist of The Mighty Diamonds, who were inspired by The Manhattans, said: “I like a combination of sounds. It’s more pleasing than hearing one person. You get more variety in the sound. It is like you’re looking at a whole lot of lights flashing in your face. That’s what makes music sounds so pretty.”

The Techniques managed to maintain a unique falsetto sound in their harmony despite the many line-up changes they’ve been through. Asked to explain this phenomenon, leader of the group Winston Riley philosophically responded: “Creating the same sound using different members is one of the most difficult tasks as a producer because if you don’t maintain the sound, you can’t maintain the group. But while I’m around, the group is always alive because I am the sound and the sound is me.” Riley’s falsetto, in tandem with those of Bruce Ruffin and Pat Kelly, gave full expression to the Impressions’ original – You’ll Want Me Back, which they renamed Y ou Don’t Care For Me. Bass man Boris Gardiner was in full flight as The Techniques sang:

“You don’t care for me at all

I found you only stay

To make me feel so very small

No you don’t love me now

And it’s gonna be too late.”