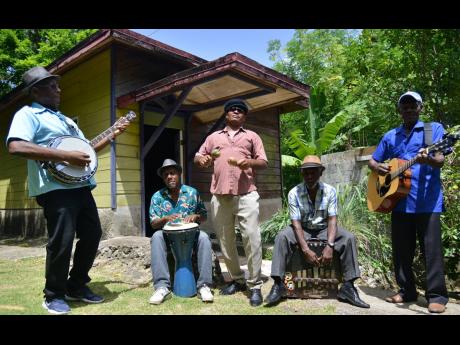 Kenyon Hemans
The Jolly Boys are a mento band from Port Antonio, Jamaica. It was formed in 1945 and had great commercial success in the late 1980s and 1990s. Pictured from right are Lenford ‘Brutus’ Richards, Donnovan ‘Jimbie’ Miller, Karl Thompson, Lawrence ‘Larry’ Christie and Noel Howard. 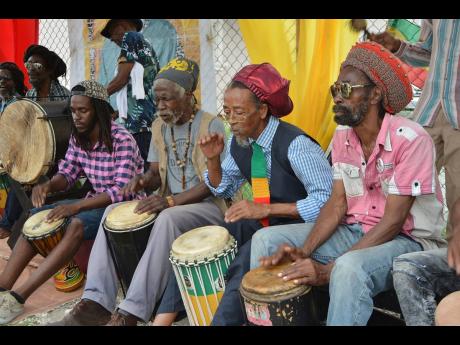 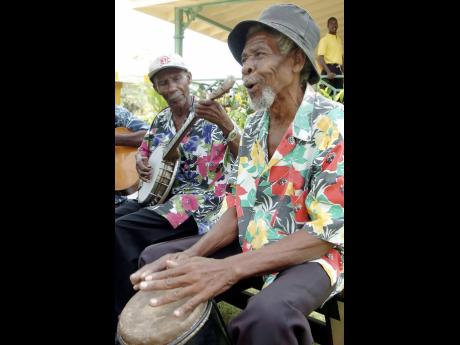 History will record that Jamaica, too, had its brand of calypso. It became known as mento. The genre has been given scant respect by musicologists and music aficionados, perhaps because it emerged at a time when the Jamaican music industry was not yet established. Mento, however, occupies a very important place in Jamaica’s popular music, being the most indigenous, along with having the distinction of being Jamaica’s first commercially recorded music.

According to former Prime Minister Edward Seaga, who has done extensive research into folk music: “Mento was very popular in the late 1940s and early to mid-1950s, and used to be played at all the popular nightclubs, including the Silver Slipper in Cross Roads, the Glass Bucket in Half-Way Tree and hotels on the north coast.” This, he revealed to me as I spoke to him from his office at The University of The West Indies in 2007, where he was completing his final books, My Life and Leadership –Vol.1 and 2. He continued: “Coming up through the ’50s and ’60s, younger people would be hearing boogie and jive music on the radio and Jamaicans generally were gradually gravitating towards this.”

To this day, mento has remained a popular draw at hotels and is still one of the music of choice for visitors to the island. Although Jamaica’s most popular music is regarded as reggae, a visitor’s first experience to live music would most likely be by a mento band, either at the airport, on a cruise ship, a hotel’s pool bar or at a government-sponsored festival event.

The indigenous nature of mento can hardly be questioned. Unlike other forms like ska and rocksteady which depended heavily on the American rhythm and blues and boogie, mento had it roots in the slave plantation system of Jamaica. Asked to give his take on this, Seaga said: “Well, everything originally came from that, but over the years there were amalgamations and crossovers – English folk ditties that were absorbed, ring games, quadrille and things like that. So you had a little bit of all that in it. And what really emerged as mento was a combination of the music brought from Africa by the slaves, and that combined with English folks songs and religious material that came out of the United States after the civil war and the great revival, and so on.”

Filtering through the system as the years went by, mento gradually spread throughout the island, and by the 1940s became the only source and supplier of music for dances, parties and social events. According to Alerth Bedasse, leader of the renowned mento ensemble The Chins Calypso Sextet, “We used to get many bookings to perform at parties and set-ups while I still lived in Pennants, Clarendon, before I came to Kingston. People would rock and dance all night to music coming from the most primitive of instruments, such as a bamboo sax, fife, banjo (an instrument resembling a guitar), a rumba box, the maraca (a shaker), and a fork drawn against a grater as a percussion instrument,” Bedasse carefully and methodically recounted. Later, a guitar, drums and flute were added. Mento bands thus became the forerunner, as it were, to the sound systems that emerged in the mid-1950s in Jamaica.

Soon after Hurricane Charley in 1951, there appeared on the scene a plethora of mento protagonists, such as The Ticklers, Baba Motta orchestra, Count Lasher, Lord Flea, and The Chins Calypso Sextet. Perhaps the most popular and best remembered cut is Count Lasher’s Talking Parrot, which warns about the dangers of infidelity in the presence of a parrot. Lasher recounted his ordeal:

“I nearly lose my life in Spanish Town

through a talking parrot that was around.

At a married woman’s home I stole a chance:

The man came while we were in romance.

As he rushed in the house, the girl rushed out

And in the heat of the excitement, the parrot shout:

Hey Danny a man inside.

Search well, he gone and hide.”

Lasher had other mento hits with Water The Garden, Miss Constance, Perseverance and The Weeds; the Ticklers hit hard with Healing In the Balm Yard, Parish Gal and Don’t Fence Her In; Hubert Porter recorded Dry Weather House; Baba Motta Orchestra released She Pon Top; Lord Flea did Naughty Little Flea, while The Chin’s Calypso Sextel ignited the mento era with Night Food.

Opinions are divided as to whether mento music had any real lasting effect on the Jamaican genres that followed. Asked to split the difference between mento and the succeeding genres and whether it had any effect on them, Seaga’s response was: “It’s quite ­different, but there are some mento pieces that have traversed into the modern period. Now, whereas mento had rhythm, the music that we developed had beat. It is a deeper thing, deeper by way of distinction, and the younger people really wanted the heavier beat.”

Noted ethnomusicologist, Dr Daniel T Neely, in his contribution to the Grounation series at the Institute of Jamaica Lecture Hall in February 2017, was spot on when he said, “A product of the colonial experience, mento emerged from the sufferer classes towards the end of the nineteenth century, produced by people for whom New World African ­traditions, European dance genres and musical exchange via interregional migration were all influences. It is, without a doubt, one of the most important elements of Jamaica’s cultural heritage.”