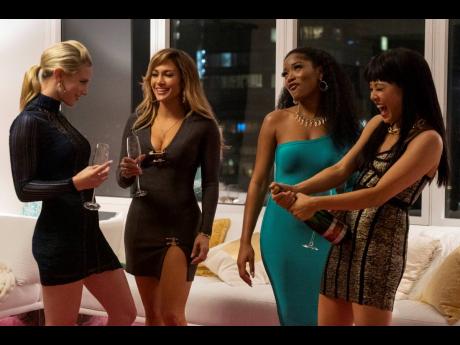 AP
This image released by STXfilms shows (from left) Lili Reinhart, Jennifer Lopez, Keke Palmer, and Constance Wu in a scene from ‘Hustlers’, which opened in theatres on September 13.

The year is 2007. The room is pitch black, with only flashes of neon to light the way. Booming speakers deafen any hope of meaningful conversation. Our main character, Dorothy/Destiny, played by Constance Wu, is increasingly disillusioned by her workplace environment, a strip club in New York City. She’s an exotic dancer herself, but she can’t seem to figure out the ropes. Maybe she’s not cut out for it. Maybe she’s not good enough. Maybe she should just go home. Suddenly, Jennifer Lopez’s Ramona struts on to the stage and takes the room and the world by storm.

From then on, the movie becomes about the relationship between Ramona and Dorothy. Ramona decides to take her under her wing, and the two develop a familial bond. Motherly? Sisterly? A little of both. It’s the kind of friendship that makes them do crazy things based on the fact that when they’re together, they feel like nothing can stop them. Not even, say the 2008 US financial crisis, a problem that they solve by conducting organised drugging and robbing of any rich man who falls into their hands.

Whether you’re supposed to root for these ‘hustlers’ depends on what part of the movie you watch. Like with most true crime stories, the characters in this movie aren’t wholly defined by their actions. The film gives you ample reason to condemn their crimes but, at the same time, makes it incredibly easy to sympathise with the criminals behind them. It’s hard not to root for them and be appalled at the same time. Credit, especially, to Jennifer Lopez, who may be taking the Oscar stage by storm as well.

Hustlers may be compared to fictional giants like Breaking Bad, Goodfellas, or several other male-centric crime stories, but the beauty of the film is that while it has familiar elements, it’s also brimming with originality. The characters in the movie are unique, interesting, and so well constructed that you’re left thinking of them in the greyest of moral areas.

The film is also excessively fun to watch, engaging from start to finish, and a throwback for anyone who has nostalgia for late 2000’s to early 2010 club music (which ought to be everyone). In a year of disappointments, Hustlers is the saviour of cinema and, without a doubt, one of the best of the year and a real contender for the Academy Awards.