Producer Damage opens up about depression 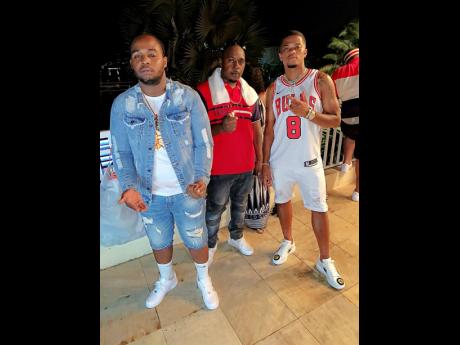 “Can you imagine getting your breakthrough at the lowest point of your life emotionally?” That was the question music producer Damage posed to The Sunday Gleaner as he opened up about his battle with depression. On the day that the world celebrated the importance of mental health, Damage revealed details about one of the darkest periods in his life. He is hopeful that his honesty about his personal struggles will inspire people going through similar situations to seek help before they are consumed by the monster that is depression.

Damage, whose given name is Dwayne Parkinson, is the producer behind Tommy Lee’s most recent hit, Blessing. The song, which is featured on his ‘Conquest Paradise rhythm, has been racking up millions of views on various music sharing platforms, causing the producer to experience a level of mainstream success he hasn’t known his entire career. But, just before that big track, Damage had been battling some personal demons. He told The Sunday Gleaner that he was at his lowest point emotionally and even contemplated giving up music. “I was investing a lot in music, videos, recordings, the works and I wasn’t getting back any returns,” he said. “One of the times, I was even saying to myself I should give up and leggo off music because it nuh look like it a work out. I was depressed. I didn’t want to go to the studio because it was like I didn’t have the energy.”

But just when he was about to throw in the towel and call it quits on his career, he decided to channel his feelings into the music. “I went into my community in Belmont in Montego Bay, up in the hills, and I was reflecting when a voice said, ‘how yah go give up on supmn weh yuh passionate about, supmn weh yuh work so hard at?’ At that time, me just start develop more strength inna me, and mi mindset just change. Me go to the studio and just let out everything inna di music, and the result was the riddim. Based on the mood I was in, I created that ballad type of beat, and it just hit.”

NATURE OF THE JOB

Well aware of the number of entertainers who have come out in recent times to admit their struggles with anxiety and depression, Damage said that he was not surprised. He explained that with the nature of their jobs, it is easier for entertainers, to fall into dark spaces. “It’s a lot easier for us, as entertainers, to become depressed because we are in high demand and in the public’s eye at all times. We affi do interviews, shows, we affi a think bout we family, we finances, coming up with the next hit, and it’s a lot to handle,” he said. “To know you have a fan base to please, management to please, the pressure comes from all different angles, and you’re just one person. It can get very overwhelming, especially when you’re trying everything and nothing seems to be working.”

Damage encouraged his colleagues to seek help whenever they feel like things are becoming too much to handle. “Seek advice,” he said. “Speak to somebody because if I didn’t take it out in the music, that was going to be my next choice. If you trust someone and have confidence in that person, talk to them about things. We’re not perfect, we are humans, and we don’t get up every day feeling strong. But we can acknowledge when we are weak, and we can do supmn about it and move forward.”

He made a plea to every Jamaican to check up on each other more. “Not everyone you see smiling is okay, so just ask questions. If you reach out more while, you will be surprised because that smile could be hiding all that’s happening on the inside. If you should sit with that person for a minute, you will probably be left in tears because of what they share,” he said. “It doesn’t take a lot to check on people. You may be the person who leads them out of the darkness and back into the light.”