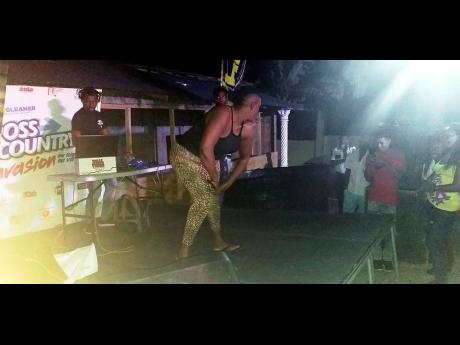 Gareth Davis Sr
A woman does the ‘Bike Back’ dance on stage during the RJRGLEANER Cross Country roadshow in Highgate, St Mary.

Excitement reigned at the RJRGLEANER Cross Country roadshow last weekend in St Mary as residents turned out in large numbers to enjoy an evening loaded with entertainment. Held last Friday at Triple P lawn in Highgate, the audience, which was a near-capacity crowd, danced to the music of varied genres played by a host disc jockey, who managed to captivate the obviously excited and enthusiastic gathering.

The evening started with the music from the ‘70s, ‘80s, and ‘90s, and before long, people began pouring into the lawn in large numbers, as news spread like wildfire about the high tempo roadshow, which is also making several stops islandwide.

“It was good music playing and I really enjoyed myself,” commented 55-year-old Patrick Anderson, a resident of Highgate.

He continued: “It’s like rolling back the years of good music. Entertainment like this one will definitely keep me out on the road, as the mixture was good. I haven’t danced to good disco and reggae music in such a long time. I am hoping that the organisers of this event will see it necessary to stage more shows in Highgate.”

It was the ‘Punaany riddim’, ­featuring songs such as Bike Back, along with the Duck dance riddim, which really created a stir among the audience, resulting in one female jumping on stage to perform the Bike Back dance to the hit song of the same name, done by Johnny P.

The appearance of a member of the group One Third, which emerged from the popular Television Jamaica-aired Rising Stars show some years ago, brought about loud cheers and appreciation from the crowd. It was a cameo performance, which had the crowd in a frenzy, as the ladies screamed and begged for more.

The roadshow also provided residents with the opportunity of winning various prizes, as the master of ceremonies kept the crowd on their feet with some hilarious jokes and gestures, which clearly signalled a night well spent by residents, who were fully entertained.