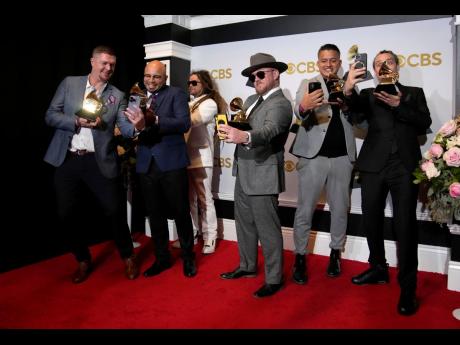 AP
Soja, winners of the award for best reggae album for ‘Beauty in the Silence’, pose in the press room at the 64th Annual Grammy Awards at the MGM Grand Garden Arena last Sunday.

For second-time Grammy Award nominee Etana, not hearing her name being called for the Best Reggae Album during the 64th annual Grammy Awards Premiere Ceremony was not a disappointment.

“I’m always happy to see others win,” Etana told The Gleaner, adding that it remains an honour to have her work considered for the prestigious award, “and to be nominated is always exciting”.

Etana not only expressed gratitude to her fans for the support they have given her album, Pamoja, but said that she had an interest in working with this year’s winners of the Best Reggae Album, SOJA, as she had the pleasure of opening for them on several shows in Florida.

“I would work with SOJA definitely if I had the chance. I am very happy for them! I posted it all over my socials the minute I heard. Again, I am so grateful for it all and for all the people who voted for my album,” she said.

It is the third time that the 25-year-old reggae band has been nominated in the category, proving it to be their charm, as their album Beauty in the Silence managed to outshine Etana’s Pamoja album as well as Positive Vibrations by Gramps Morgan; 10 by Spice; Live N Livin by Sean Paul; and Royal by Jesse Royal.

As the band stepped up to collect their award, they paid their respects to reggae’s birthplace.

“To the founding fathers of reggae and the island of Jamaica, You’ve inspired us all. Give thanks, one love.”

This is also not SOJA’s first time being the only non-Jamaican act on the list of nominees for the Best Reggae Album. In 2014, SOJA’s album Amid the Noise and Haste was nominated for the 57th Grammy Awards Best Reggae Album. Ziggy Marley took home the award with Fly Rasta. They were nominated again for their Live in Virginia album in 2017.