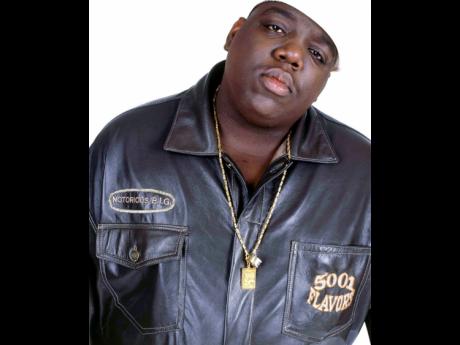 File
Notorious BIG poses for a portrait by photographer Chi Modu, in New York on May 1, 1996.

The Brooklyn-born star was killed in a drive-by shooting in Los Angeles in March 1997, aged 24, but Kim is convinced he would’ve still been a “funny, fun, handsome” man at the age of 50.

Kim, who was a good friend of the rap legend, explained: “It’s always important to honour the king. He’s the king. The king lives on. He’s just an amazing person, amazing artiste ... his legacy. It’s just great. Like, I mean, look at the catalogue. Look at everything that he’s accomplished, even at such a young age.”

Biggie would’ve celebrated his 50th birthday last Saturday and his son, CJ Wallace, is thrilled that his dad’s “legacy” continues to live on.

He told People: “You know how deep the legacy lives on and you know how important it is to the family at the end of the day. He has more than just his bloodline, he has a real distinct family of people that go beyond the grave.”

The rap icon only released two albums before his death, and CJ is amazed by what his dad managed to achieve in such a short period of time.

The 25-year-old actor, whose mom is singer Faith Evans, explained: “He was more than just a rapper, more than an artiste. He was an educator, he was a poet, obviously a writer. He was a prophet. He was here to do more than just make some songs or record a couple of albums, which is at the end of the day, that’s what he did. And he did way more than that in his spare time.”