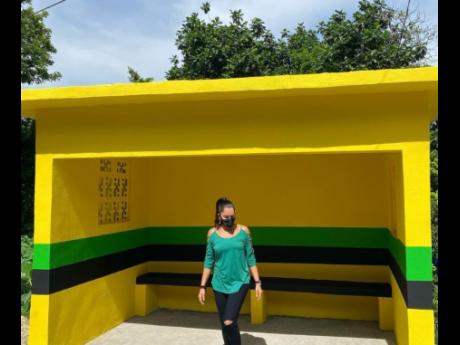 Ann-Marie Vaz inspects one of the bus sheds she has worked on to help constituents of East Portland navigate public transportation in more comfortable fashion.

Vaz, who won on a Jamaica Labour Party (JLP) ticket on September 3, defeating newcomer Bishop Purcell Jackson of the Peoples National Part (PNP) 8,360 votes to 6,235 for a victory margin of 2,125 votes, says she is determined to impact the lives of the people positively and to restore hope to those, who may have given up.

Since securing her own mandate, Vaz, who is also the wife of, Daryl Vaz sitting MP for the neighbouring West Portland, argued that the basic infrastructure and amenities of the constituency including roads, light, and water, had been allowed to run-down as a result of years of neglect on the part of political representatives.

“It is time for action and as an elected official, I aim to improve the basic infrastructure of this constituency,“ said the East Portland MP.

“The reality is that I assumed responsibility for a constituency, which has endured high levels of neglect, and is in dire need of attention. I have responded to the cries of the people, who have literally begged me to enter representational politics. The road network is atrocious, and the lack of potable water is a perennial problem.

“My aim is to create the kind of platform, which will allow for real growth in this constituency, wherein each individual will be afforded the opportunity of improving their living condition and to experience real prosperity. I am MP for all P’s and no P. I don’t see colour or politics when it comes to improving the lives of the people of this constituency. Under my watch, every individual will benefit from the resources at my disposal,“ the MP added.

The female MP, who is the first woman from the constituency and the parish to serve as an elected official in parliament, reflected on her achievement and a past that provided for her an appreciation of the good things in life and to also reflect on the many obstacles.

Describing herself as modest, friendly, warm, and caring individual, Vaz said people provide her with motivation as she seeks to transform lives on a large scale.

“I don’t pretend to be who or what I am. My love for people comes naturally and everything I do comes from the heart. I have experienced hardships, hunger, and pain. I was raised by my grandmother, Eva May Wright, from the tender age of 6 months. I never knew my biological parents and my grandmother basically took care of all the children in our community of Duff House in Manchester.

“I grew up as a tomboy, running around playing in the bushes, catching birds, doing bird shooting, and just making the use of what nature offered. I had no dolls, no toys, and nature was my playground. Back then we had a kerosene oil fridge, which was used to store medicine for the people of that community. Family is more than just being blood related. We all ate together and were fed by my grandmother. But I was determined to be successful and today I am what I chose to become.”

The MP, who once worked as a flight attendant, pointed out that her grandmother, helped to shape and groom her for the real world, and that past experiences have allowed her to adopt a more loving and caring attitude towards people.

The reality of being a public figure now allows the MP to focus on rebuilding the lives of residents, who according to her, have been poorly served by her predecessors.

According to Vaz, continuing road construction/rehabilitation along several corridors are high on the agenda, though the spread of COVID-19, coupled with recent heavy rains has slowed the process.

Among the roads listed to undergo major rehabilitation in Eastern Portland are the Anchovy to John’s Town Road and the Tranquility Heights Road. Additionally, the second quarter of a road-patching project is to continue. That project includes Stanton Court, Reach Road, and Muirton Penn Road. While Tom’s Hope Road is to undergo major patching through a joint initiative with the ministry of tourism.

Vaz, who spoke at length during an interview with The Gleaner, is also paying close attention to other infrastructural improvements, which today includes things like Internet penetration.

According to Vaz, the response to COVID-19 has underscored the need to increase Internet penetration.

As such, an agreement with mobile/Internet providers and government is expected to come on stream shortly, where free Internet/WIFI will be available throughout the town of Port Antonio.

Vaz also wants to improve the delivery of potable water to a number of communities and even introduce it to others.

To that end, the construction of a water shop at Windsor Forest district in Eastern Portland is now just awaiting an official opening.

The model is to be replicated in Commodore with that construction already under way.

There are also other infrastructural changes that can serve as a means to achieving social change as well.

Vaz is a busy woman and has mandated that a solar stand be erected at the Stony Hill Water Station in that community and has had water tanks distributed to residents.

To add to all that, Vaz has also begun the upgrading of the Cornwall Barracks water system in the upper Rio Grande.

Portland residents travelling through Norwich have hell to pay when it rains but could soon find some relief through the construction of a shed at the designated bus stop.

The issue of flooding is also something that Vaz holds dear to her and something her constituents would like to see the back of.

To that end, the bushing programme along the major and public thoroughfare in several communities is to commence.

Farming is one of the major earners in Eastern Portland and Vaz doesn’t intend to neglect the industry, making a one-time cash grant available to farmers’ groups.

Along with that grant there is the intention for the distribution of building material, fertiliser, and fishing wire to farmers. Even the students of agriculture can look forward to assistance with the construction of an Automated Teller Machine (ATM) at the entrance to the College of Agriculture Science and Education (CASE) at Passley Gardens set to be completed.

Sportsmen and women are also set to benefit from the sweeping improvements Vaz intends, with the upgrading of the Moore Town Football Field in the upper Rio Grande Valley set to be completed. The construction of the Nonsuch Playfield is also in its final phase.