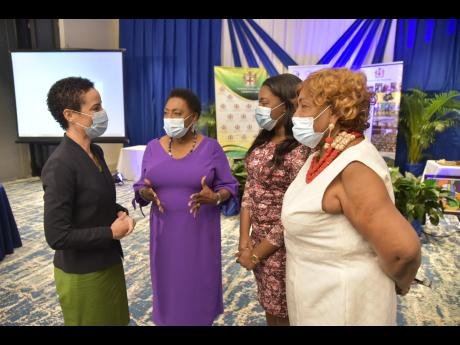 Former Prime Minister, the Most Hon Portia Simpson Miller; and former Cabinet Minister, Dr Mavis Gilmour, are among 25 great Jamaican women, who will be honoured on International Women’s Day next year.

Minister of Culture, Gender, Entertainment and Sport, Hon Olivia Grange, made the disclosure at the Women Parliamentarians Breakfast held at The Jamaica Pegasus hotel in New Kingston earlier this month.

The event was hosted by the Ministry through the Bureau of Gender Affairs (BGA) in partnership with the Jamaica Women’s Political Caucus (JWPC) to celebrate 2020 as a historic year for women in politics.

Grange told JIS News Simpson Miller created history in 2011, when she became the first woman to be elected prime minister “and we owe it to her to honour her and we will do so next year”.

“Another woman that we should honour is Dr. Mavis Gilmour, who at 94, is still going strong,” added Grange.

Grange told JIS News the Ministry had planned to pay tribute to the women during the 16 days of activism against gender-based violence, which started on November 25, but the plans were put on hold due to the coronavirus (COVID-19).

“We were planning to honour a number of outstanding women in Jamaica … We are now looking at March when we celebrate International Women’s Day,” she said.

The Minister, in her keynote address at the function, highlighted several pioneering women who paved the way for this generation of women in politics. In addition to Mrs Simpson Miller, she said these include the first female Cabinet Minister, Rose Leon and the first female Mayor of Kingston, Iris King.

“We are all phenomenal woman in every sense of the word, and I want you all to remember that the history of women in politics in Jamaica is a long one, going back to 1944 when Iris Collins made a bid for North West St James. She was the first winner and the youngest in 1944, at age 29. She opened the door,” she noted.

Minister Grange also recognised and lauded all the women who contested and were successful in this year’s general election, taking a seat in the House and all those who were appointed as Senators, as well, the women who are serving the country politically in other ways.

Minister Grange encouraged the younger women in politics to join the JWPC and made an appeal for more females to enter the political arena.

President of the JWPC, Marline Daley, for her part, said the organisation was delighted to see so many women in politics and saluted all the new politicians.

“In my lifetime, I have not so many young, intelligent and professional women dip their feet into the political waters and, not just as candidates, but now a lot of you have become Members of Parliament,” she said, noting that 18 of the 30 female candidates who contested the election are members of parliament (MPs).

She said the Caucus was established to encourage greater participation from women in representational politics, and over the last three decades has conducted several training sessions and workshops with hundreds of women across the political landscape.

She said several of the participants are now government ministers, councillors, ambassadors, mayors, and senators and continue to make solid contributions in all spheres of political life.

“Our target of 40 per cent representation in Parliament has not yet been realised but, today, we can safely say we are getting there,” said Daley.

The breakfast event was held under the theme ‘Acknowledging, Recognising and Celebrating Purpose in Leadership’ and included the presentation of certificates, gifts and cash to women who ran as candidates in the 2020 general election, representing the amount paid as nomination fees.

There were also special awards and certificates for the eight female senators.

The percentage of women in the Jamaican Parliament stands at a record 28.5 per cent, while 38 per cent of senators sworn in the Upper House are females.