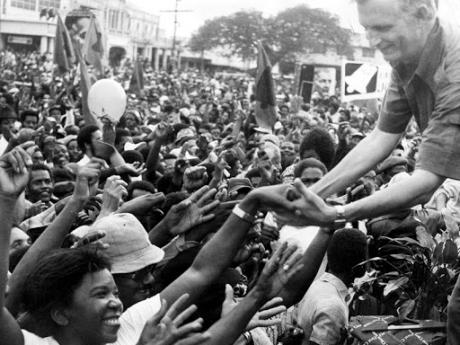 OCTOBER 1980: Opposition Leader Edward Seaga being greeted by a section of the huge crowd at a JLP election rally at South Parade in downtown Kingston. - File photo

The enthusiastic contribution of women to the People’s National Party’s (PNP’s) overwhelming victory in 1976 was a clear indicator of the progress they had made during Michael Manley’s administration. Throughout the campaign, women were on the front line leading the singing of Party songs and exhorting the electorate to vote PNP.

However, even as they celebrated, there were already signs the progress they had made would not be sustained.

Things had begun to fall apart as the class alliance that Michael Manley had built around the politics of change began to disintegrate and the economic crisis showed signs of deepening.

The disintegration of the class alliance was most evident in the divide that had emerged between the PNP and the private sector after the Party’s declaration of “democratic socialism” in 1974.

By 1976 the state sector had expanded to own or control the “commanding heights of the economy”. Matters came to a head in January 1976 when private sector associations, companies and individuals  came together to establish the Private Sector Organisation of Jamaica (PSOJ) to protect free enterprise from what they perceived as a growing encroachment by the state.

However, even before the PNP launched democratic socialism in 1974, profound changes had taken place in the global economic environment, which had created a social democracy crisis globally.

Internationally, capital had recovered from the devastation of World War II to demand the institution of a free-market economy dominated by the private sector along with the free movement of capital and currency in the international money markets as pre-conditions for investment.

The consequence of the falloff in investments which followed was the high rates of unemployment together with high inflation which led to the global economic recession of 1973.

Margaret Thatcher, who was elected leader of the British Conservative Party in 1975, immediately made it clear that her Party in government would implement the policies imposed by capital in the new global economic environment. These were “to replace the mixed-economy with a private sector dominated market economy. This, in turn, was to be complemented by a reform and reduction of the welfare state, by a lowering of direct personal taxation. Institutions which hampered the operation of the market, in particular trade unions, were to have their powers and legal privileges curbed. Finally low inflation rather than full employment was to be the central goal of economic policy.

By the elections of 1976, the Jamaican post-war economy had collapsed. A 400% increase in the cost of oil in 1973 had increased Jamaica’s energy costs from US$65 million to US$177 million in 1974 causing the destruction of the manufacturing sector overnight.

The bauxite levy imposed by Jamaica only brought temporary relief as the bauxite companies reduced their production in Jamaica and Jamaica lost market share to other suppliers.

The moment of truth came in the same month of the election victory when the government decided that the economic situation required the intervention of the International Monetary Fund (IMF). Depleted foreign reserves, skyrocketing prices, empty supermarket shelves, migration of the managerial classes and unprecedented levels of partisan violence were all manifestations of the deepening economic crisis that gripped Jamaica between 1976 and 1980.

The JLP cited mismanagement and communist ideology as the cause of the economic collapse and social deterioration, while the PNP blamed sabotage at home and US-sponsored de-stabilisation from abroad.

However, it was the JLP charges of creeping communism and mismanagement, more so than the PNP’s claims, that carried the electorate in the 1980 election campaign with the assistance of the local and international media.

It would take another 40 years before the PNP’s claims were substantiated in declassified US documents. Testimony by National Security Council staff member, Robert Pastor, described “the CIA's covert campaign to de-stabilise the Manley government by financing... areas in media; funding the Opposition JLP; ..... and publicly condemning Manley's ties to the Cubans and the Soviets.....”. It made no difference that “the State Department [had] solicited a political profile of Prime Minister Manley from British intelligence which referred to Manley as “a leader who is neither a Marxist nor a revolutionary”.

The real concern for US policymakers in the State Department was the extent to which “Manley’s democratic socialism in Jamaica highlighted class distinctions and empowered black people on the island, which they feared could spread to the rest of the Caribbean”. In this context “the anti-communist narrative became a convenient cover to kill off the long-term threat that black empowerment represented to US policymakers in the region”. Seaga and the JLP also found this narrative convenient in their increasingly strident election campaign.

Jamaica’s failure of the 1977 IMF Test led to what Manley described as “one of the most savage packages ever imposed on any client government by the IMF”. The PNP’s Women’s Movement was one of the most strident voices advocating a break with the IMF, and for the government to adopt a non-IMF path in re-structuring the Jamaican economy.

The government’s support reached an all-time low. This was the background against which the 1980 election campaign became the most violent in Jamaica’s history as women of all social classes were fully mobilised and engaged by both political parties to play a decisive role.

It was a major advance, especially for working-class women.

Maternity leave added to the other gains women had made, which included - the Family Court, the minimum wage, the impact work programme and the community health aides programme, and considerably strengthened the PNP’s appeal to women in the election campaign.

The Sistren Collective, established in 1977, took to the stage and used drama to highlight the particular challenges faced by women and to exhort the PNP to do even more. All three organisations took to the streets to participate in the solidarity marches with the PNP.

The women, opposed to the PNP’s democratic socialism, were equally vocal. The more militant took their place in the forefront of the JLP’s street protests, while others dominated call-in programmes on radio.

In the context of the perceived threat of communism, the deteriorating relationship with the United States, escalating violence and economic collapse, it was the JLP’s message that fed the fear that overwhelmed the PNP.

However, even as the wives of private sector managers migrated with their husbands to the USA and Canada, working-class women seized the opportunity created by the economic crisis to expand their trade as higglers and provide scarce commodities at competitive prices.

Absent from the list of candidates was Rose Leon. Her loss to Mavis Gilmore in West Rural St Andrew in 1976 had brought an end to her outstanding role in representational politics.

Despite the violence which claimed the lives of some 800 Jamaicans, the voter turnout for the 1980 General Elections remains the highest in any election. A record 860,746 registered voters cast their ballots, which represented 86.91% of the voters on the list. The JLP scored an overwhelming victory, winning 51 of the 60 seats with 58.34% of the popular vote. It was the PNP’s worst defeat with only 9 seats and 40.67% of the popular vote.

The dramatic swing from the PNP by the middle and upper classes was most evident in North Central St Andrew. This seat, which had been won by the PNP’s Alan Isaacs in 1972 with 78% of the vote; switched allegiance to give the JLP’s Douglas Vaz the seat in 1976 with 52% of the popular vote, and in 1980 returned Vaz with 73% of the vote.

Among the urban poor and working class, who dominated the seven constituencies below Cross Roads, the PNP retained its support, winning five of these constituencies. The role of women in these victories was confirmed by Ralph Brown, the winner of the West Central Kingston seat: “Four out of every five of my Party workers are women”.

In contrast, East Central St Andrew was the PNP’s only victory in the eight constituencies above Cross Roads in which the influence of the middle and upper classes was decisive. In rural Jamaica where the anti-communist propaganda prevailed, the PNP won only three seats.

Mavis Gilmore was the only female named to the JLP cabinet and was given the education portfolio. The four women named to the Senate were all new and brought a wealth of experience and training to their roles as legislators.

Jeannette Grant-Woodham, M.A. was the current principal of Tivoli Gardens Comprehensive High School and had served as Resource Specialist on Courses in Administration for Teachers and chairperson of the National Advisory Council on Women’s Affairs. Patricia Pink was from a family which made representational politics their calling. Her father, Neville Lewis Snr. and brother, Neville Lewis Jnr., had both served as elected representatives and members of Cabinet in JLP administrations.

At the time of her appointment, she was engaged in a range of social development activities among communities in St Ann.

For the youngest, Maxine Henry, her appointment was an important step in her blossoming political career.