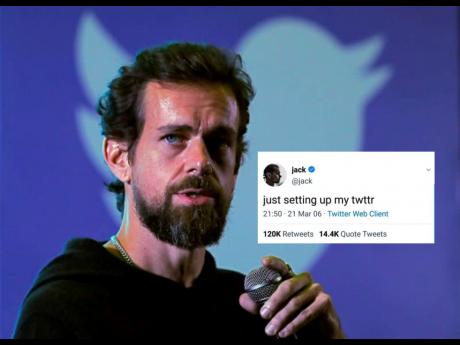 The social media post, which said "just setting up my twttr", was first published in March 2006 and was sold to Malaysia-based businessman Sina Estavi.

Estavi purchased the tweet using the cryptocurrency ether and compared the purchase to buying a Mona Lisa painting.

The Twitter post was sold as a non-fungible token (NFT) to Estavi. An NFT is a unique digital certificate that states who owns a photo, video or another form of online media.

Estavi wrote on the micro-blogging site: "This is not just a tweet!

"I think years later people will realise the true value of this tweet, like the Mona Lisa painting."

Dorsey revealed that he plans to convert the proceeds to Bitcoin and then donate them to the Give Directly Africa's Response fund.

The tweet was sold via the online platform Valuables, which is owned by the US-based company Cent.

Under the platform's terms, Dorsey will receive 95 per cent of the proceeds with Cent getting the rest.

The post will remain publicly available on Twitter despite the sale and social media experts have predicted that the trend of buying tweets and other online posts will become more popular.

Cathy Hackl, founder of technology consultancy Futures Intelligence Group, said: "We live in an age where celebrities, musicians and influencers have more than fans, they have stans, and they will want to own a piece of their favourite stars.

"Just like people buy physical memorabilia, they will buy their tweets, posts, and snaps because they want to feel close to that star."