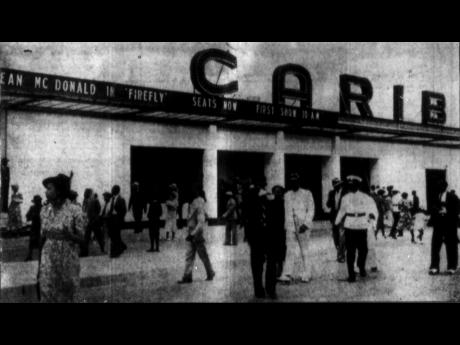 A section of the crowd that attended the opening of the Carib Theatre on April 13, 1938.

The Carib Theatre, following a fire in 1997, had to be completely renovated. After, it was, its popularity was unmatched in Kingston and St Andrew. There was competition from other venues before that fire but after, none. In truth, the Carib Theatre’s position as the top cinema house in the country since 1997 really symbolised a return to former glory. When it opened its doors all the way back in 1938, there was also … no comparison.

IT HAS HAPPENED; the film event of the decade. The Carib Theatre yesterday forenoon at 10 o’clock unfolded in all its splendour to an expectant picture-going public, its studded opulence, comfort, lavish settings, up-to-date fittings, and almost fantastic aliveness, causing the accolade to be bestowed on the Cinema Company of Jamaica Ltd.

Rarely, if ever, have Kingston and St. Andrew film-fans seen such a day.

The trek in the Carib began at 10 o’clock, when hundreds, mostly women, turned out for the premiere of the Theatre which their eyes for weeks past had, perhaps marked as colossally luxurious.

And the reaction of the fans as they entered the Theatre, sat for two and a half long hours and watched an exceptionally fine film in comfort, proved that they had not been deceived by their eyes. The consensus was that it was just grand…swell.

The forenoon and afternoon crowds at 10 a.m., 2 p.m., and 4:30 p.m. did not attract vast crowds, but the two shows last night as was expected, attracted thousands from all parts of the Corporate Area and even from neighbouring parishes. Cross Roads was the scene of the biggest traffic jam in its history.

­­Society was well represented at both evening performances; commerce, the civil service, the legal profession, the medical fraternity, and plain Mr. – added their quota. It was a memorable night, was last night’s scene.

But let’s hark back – the show is the thing. It is on. We hear the roar of famed Leo, see the cinematic image of likeable Stewart Erwin, and hear his voice bidding us welcome to the new Theatre. We are taken to the cinema capital and of course, to the Metro Studios where shots of the stars are shown - real life shots. Flashes of important pictures coming to the Carib “for your entertainment “are presented and Mr. Erwin is seen again wishing us “many hours of happy entertainment in your new theatre.

ROMANCE OF THE CELLULOID

Comes another “Carib feature”. “The Romance of the Celluloid,” an absorbing and explanatory short-subject depicting how celluloid films are made. “News of the Day” follows, and the roar of Leo is heard once more, introducing something new. This time it’s the feature picture: “The Firefly.”

Gay , lavish and drama-packed with Jeanette MacDonald and Allan Jones, singing gloriously, the film drew applause and praise from the audience. Its own lavishness and stirring beauty is not in the least dwarfed by the splendour and magnificence of the Carib. NOTABLES ATTEND

From Montego Bay came Mr. Walter Fletcher who also attended with a party.