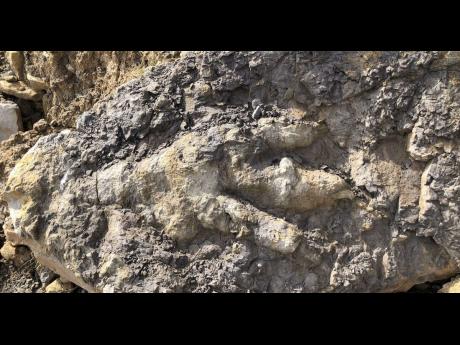 A dinosaur footprint from a "Jurassic giant" has been found on a beach in Yorkshire.

Marie Woods noticed the fossilised print as she was collecting shellfish and experts believe it was made by a dinosaur with a body length of eight to nine metres.

Specialists suggest that it matches the print of a Megalosaurus, which lived between 164 and 175 million years ago.

Woods admits she was stunned to stumble across the print and hopes it can be preserved before it is washed away by the sea.

The archaeologist told Sky News: "I was grabbing some shellfish for dinner. I didn't collect much after seeing that.

"It's in a fragile state and sits close to the water level, meaning it could be lost to the sea.

"John Oxley [former city archaeologist of York] came to take a series [of] photographs so that we could create a 3D model if a collection isn't possible."