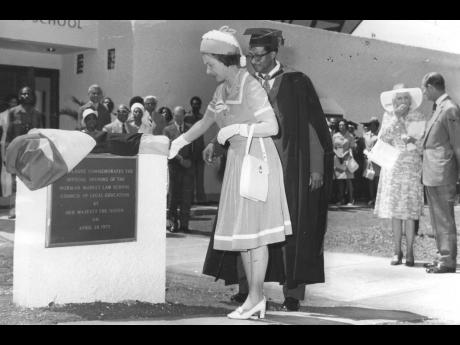 File
Her Majesty Queen Elizabeth II unveiling the plaque commemorating the opening of the Norman Manley Law School at Mona on April 28, 1975. Behind her is Mr. H. Aubrey Fraser, Director of Legal Education and at right in the background are Prince Philip and Mrs. Edna Manley. 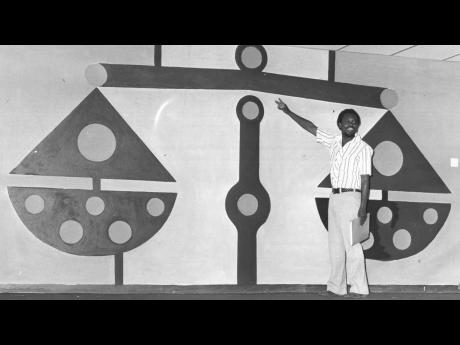 File
Carl Miller, a student at the Norman Manley Law School on the UWI Mona Campus, points out the symbolism of the scales of justice in the Karl Parboosingh mural in the School's lounge.
1
2

The Norman Manley Law School, like neighbouring institutions like the University Hospital of the West Indies, match up with the best in the world. Maybe the Queen’s blessing in 1975 has something to do with that. Food for thought.

THE NORMAN MANLEY Law School, the first law school in the West Indies, where students are "to receive the instruction of wisdom, justice and judgment and equity" was declared open on the morning of April 27 by Her Majesty Queen Elizabeth II of Jamaica.

The school, situated on the Mona Campus of the University of the West Indies in the words of Her Majesty ”is to be named after Norman Manley, one of the National Heroes of Jamaica and one who helped to lead his country to Independence. He was, and always remained, a lawyer of learning and quality. It is right, therefore, that his memory and the work and service he gave to his country should be perpetuated in this way, and in the presence of his widow and family and many whom he inspired to uphold the law."

Her Majesty, who is the University's Visitor, expressed her pleasure at being present on an occasion of such importance to the U.W.I.

"The common law of England," she said, "has migrated to many parts of the world —indeed, it is one of the significant links which holds the Commonwealth together. It is most appropriate, therefore, that the opening of the new Law School should take place when the Leaders of the Commonwealth are about to meet in this Island.

"The connection between the legal systems of Britain and the West Indies is old, indeed it is the oldest in the Commonwealth. This relationship has ripened for 300 years and it is right that it should now find expression in the creation of a West Indian system of legal education of which this school is a part. “It is law which determines the relationship between people wherever they may live, and it follows, therefore. that its preservation and the refinement of its rules have progressively improved the status of the individual and the quality of his life.

"In our rapidly changing world it is all the more important that the rule of law should be sustained. (Applause).

“Each country in its search for solutions to meet the realities of the change  must eventually shape its own legal institutions so they best meet the hopes and needs of its people. But there should be one guiding principle, if justice is to be done to all manner of men, there must be constant and watchful attention to the fabric of the law, to its content  and not least, to the education of those who are to practice it.

The solutions for the problems of the West Indian people must engage the attention and the talents of West Indians. And this school will have a vital part to play in apt process because it will serve the countries of the Western Caribbean from the Bahamas to Belize.

As she concluded her speech to standing ovation from the huge gathering in the U.W.I. Senate Undercroft before performing the official opening, Her Majesty expressed the hope "that many generations of West Indian lawyers will find satisfaction, learning and the opportunity to serve within its walls.”

The welcome to Her Majesty and 'H.R.H the Duke of Edinburgh was given by the Vice-Chancellor, Mr. A. Z. Preston, who gave a history of the establishment of law studies at the U.W.I.

The chairman of the Council of Legal Education, Sir William Douglas, who is the Chief Justice of Barbados, invited her Majesty to declare the law school open. He too, paid "tribute to the great lawyer whose name the school bears and who in such large measure set the high standards of learning, integrity and forensic skill which this school is dedicated to maintain."

Sir William also recalled "the excellent work done by the late Sir Hugh Wooding and the members of his committee in laying the foundations of the system of higher legal education of which this school is part."

The participating governments: the U.W.I. and the legal profession in the several territories received his thanks for their support and assistance.

In conclusion, Sir William said the Council and the entire legal profession in the territories were “indebted to the Director of Legal Education and his staff for their dedicated and untiring services in the cause of legal education in the Commonwealth Caribbean."

He hoped the "fine new building" -- a tribute to the architects and builders —would “continue to maintain the high standards that have been set."