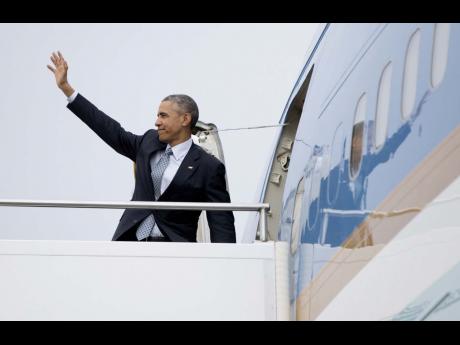 AP
President Barack Obama waves as he boards Air Force One at Louisville International Airport in Kentucky on April 2. He is scheduled to visit Jamaica on Thursday.

That's a rule of thumb for American presidents. They come to office with a mandate and a Congress which, if not sympathetic or even partisan, is at least reluctant to oppose the electorate's approval of the new leader. As much as possible, presidents, therefore, try to hit the ground running by passing as much of their domestic

legislative agenda as possible in the first couple years in office.

Later on, especially if they are so fortunate to achieve a second term, the tide begins to turn. Their honeymoon done, their star wanes; midterm congressional elections usually favour the Opposition. Finally, as they enter the last quarter of their term and the campaign for the next presidential election gets under way, presidents become lame ducks who struggle to get much of anything past Congress.

On the other hand, their hands are relatively untied when it comes to the outside world. After all, the president exercises foreign policy and remains commander-in-chief of the world's most powerful military. There is still a lot he can do abroad. So the tendency is for late-term presidents to devote themselves ever increasingly to foreign affairs - brokering a peace deal here, securing a landmark treaty there.

President Obama is no different. Although he soldiers on with his domestic agenda, he can only accomplish so much given the hostility of the Republican Congress to him, and indeed to all things Democratic. His visit to Jamaica can be seen in that light. It has none of the ideological significance of, say, Edward Seaga's invitation to Washington, DC, in 1981, when the incoming Reagan administration signalled it would be implementing a new approach to the Caribbean.

But if it is just a flying visit, it is not without significance. If its tactics have at times looked confused, a clear strategy has driven the Obama administration's approach to the world. President Obama has built his foreign policy on a realistic vision of America's increasingly diminished place in the world. Even though the US remains the world's pre-eminent superpower, a status that nobody will challenge anytime soon, the economic ground is shifting beneath the country's feet.

Put simply, the US's share of global output and trade has been declining since the turn of the century. That means that, relatively speaking, its ability to determine events in far-off corners of the globe will be increasingly constrained by new players, from an ascendant China to new non-state actors like Islamic State (IS). This will force tough choices about where the US can extend its influence, where it will need to rely on its partners, and where it simply must withdraw.

This hasn't always played well at home, given that Americans had grown accustomed to a sense of omnipotence in world affairs. And the strategy's implementation has at times been messy. Washington's desire to contain IS in the Middle East, for example, has pushed it to support both its Saudi allies and to cooperate tacitly with the Saudis' mortal enemy, Iran. Still, if the tactics of this vision remain a work-in-progress, it is a forward-looking approach to a change that will happen anyhow. In Obama's world view, it's better to redefine America's place in the world while it still enjoys the power to determine that place, rather than wait and have it defined by others.

Needless to say, in this new and more-modest approach to the world, the Caribbean will be important. America's backyard, it is also a soft underbelly, given the region's persistent poverty and vulnerability. Making a quick stop in Jamaica en route to a summit makes perfect sense, since it gives Washington a chance to shore up regional security cooperation.

And if he also stirs up a wee bit of feel-good among Florida's West Indian voters ahead of the next presidential election, who in his Democratic Party will complain?

- John Rapley lectures at the Centre of Development Studies at the University of Cambridge. Email feedback to columns@gleanerjm.com.