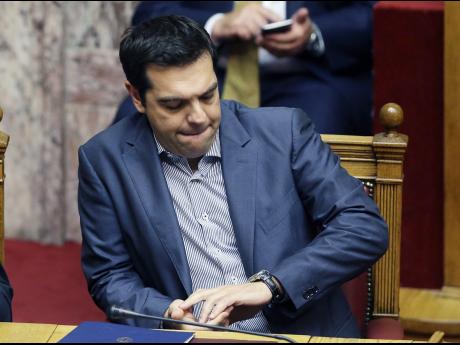 Last week, Greece defaulted on a €1.7-billion payment to the International Monetary Fund (IMF), earning it the distinction of being the first developed country to default in the IMF's 71-year history.

Prime Minister Alexis Tsipras came to power on a promise to the electorate to end Greece's five years of austerity, but for the Greeks, it has been nothing but a nightmare. The referendum held last Sunday in which the Greek electorate voted overwhelmingly (61 per cent) in support of the Government's call to reject the latest deal from the creditors has not resolved anything. If nothing else, it has pushed Greece further into the abyss.

Still, everyone is watching to see how this stalemate is resolved ultimately, as any sign of capitulation on the part of the European Union (EU), the IMF and other creditors could send the wrong signal globally.

Those who are calling for a similar showdown with the IMF here surely do not want the chaos and misery unfolding in Greece at our doorstep. There's a Jamaican proverb that says, 'Puss and dawg nuh have di same luck'. Whatever your views are about the usefulness of the capital markets, all countries, especially small countries like Jamaica, have to maintain their credibility and reputation by sticking to the agreed commitments with multilateral financial institutions and other creditors.

There's no similarity between Jamaica and Greece except that both countries are undertaking reform programmes, supported by the IMF, to reduce the high debt burden and create a cycle of increased growth and employment. Greece is a developed country that, until recently, was ranked the 43rd largest economy in the world. Greece's GDP per capita is US$21,956.41, which is ranked 37th globally, in contrast to Jamaica's US$5,289.97, with a 126th global ranking.

In terms of population size, Greece is at approximately 11 million; Jamaica has fewer than three million. Greece belongs to a consolidated union of nations, the European Union, which is a formidable economic bloc, comprising 28 democracies. On the other hand, Jamaica is a member of CARICOM, comprising 15 small states, with significantly less economic power.

As the Greek crisis unfolds, our politicians and commentators have been trying to draw comparisons and offer advice to the Jamaican Government to adapt Tsipras' attitude and attempt to unilaterally dictate to the multilaterals what measures they prefer to implement to reduce their debt burden, what reforms they wish to implement, and how much they plan to repay. The recklessness of Tsipras' approach has set the Greeks back further because, in addition to the debt default, much of the reforms to be undertaken under their economic reform programme haven't been observed or fulfilled, and Greece has not completed an IMF review in over a year.

For its part, Jamaica has successfully completed eight reviews, having adhered to the programme and implemented the reforms necessary. And according to the minister of finance and planning, the country is on target for the successful completion of the ninth IMF review.

One of the louder of the detractors, for example, has been urging public-sector workers to demand more than what the Government has placed on the table. Recall that one of the programme's objectives is bringing the wage bill to 9% of GDP by the end 2016-2017. This was the same voice that made an election campaign promise in 2007 to double the wages of some public-sector workers.

Having won the election, this same voice made these remarks to public-sector workers in 2010 in response to their wage demands: "What we want to stress to the public-sector groups is that we are not out of the woods yet, and in order for us to have sustained stability and give the country a chance to grow, we are going to have to suppress our demand and appetite for wage increases. Instead, we will have to concentrate on productivity gains in the near and medium term. Once you get productivity gains, wage increases will follow." (Audley Shaw, 2010).

He also has the distinction of saying: "The truth is many countries abroad are cutting wages and jobs. We can't continue to believe that we in Jamaica are on a fiscally irresponsible excursion where we can continue to grant wages increases ad infinitum without seeing any growth in the economy or without seeing any productivity. It doesn't work that way." (Shaw, 2010).

Mout' really mek fi chat! By the time of the intervening elections of 2011, Jamaica's credibility and reputation in the international community were all but destroyed. Resources from multilateral institutions had ceased and the international capital markets were closed to Jamaica, resulting in a significant decline in the net international reserves (NIR) of the country. Jamaica, very easily, could have suffered the same fate as Greece, with capital controls and closure of banks, had the current administration not negotiated a new deal with the IMF.

Simply put, Jamaica was heading into uncharted waters, only to be saved by the intervening election of December 2011. As a result of the change of administration, the people of Jamaica did not suffer to the extent as the Greeks, who are now faced with an uncertain future. Today, we are in a much better position than we were in 2013, and while we are not yet out of the woods, and fragility remains, it is critical that we do not disrupt the programme.

The ongoing public-sector wage negotiations and the unrealistic demands by some unions have the potential of derailing Jamaica's programme and setting back our recovery. The public-sector workforce was asked to endure a wage freeze for the last five years; however, during this same period of restraints, the public-sector workforce received J$19 billion in back pay, reclassification, one-off payments, payment of salary arrears, plus the annual 2.5% increments in salary. In fact, another one-off payment becomes due August 2015, which, according to the finance ministry, will be honoured.

live within its means

In undertaking the reform programme, Jamaica committed to live within its means. Most of us, in our own personal lives, operate with controls. Why should we expect, therefore, that the Government do otherwise? If the Government cannot pay the increases now, why should it borrow to add to our debt burden?

Why should we stay the course? In the first instance, we do not want the Greek meltdown to occur here. If nothing else, we need to stay the course to ensure that Jamaica is a better place, but in order to achieve this, we must continue to live within our means.

There are plenty of indicators suggesting that the programme is working. For one, the country has reduced its reliance on borrowing, and has been able to achieve a reduction in interest rates, which gives investors access to cheaper capital. So far, we have been spending less on imports, meaning that we are able to save more in foreign exchange.

- Donovan Nelson is an aide to the minister of finance. Email feedback to columns@gleanerjm.com and nelsond1960@gmail.com.