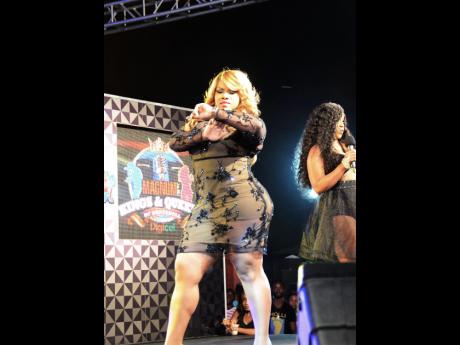 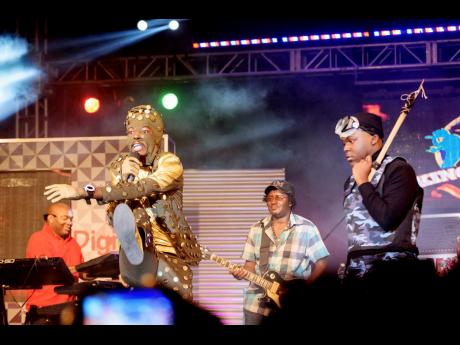 Contributed
Devin Di Dakta (left) is a picture of animation as he clashes with Lava Vein in the final of Magnum Kings and Queens of Dancehall 2015 in downtown Kingston. 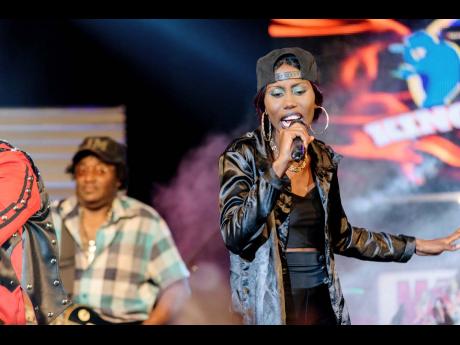 Contributed
Ffrench didn't hold back in mixing wit and insult in the clash with Triple A. 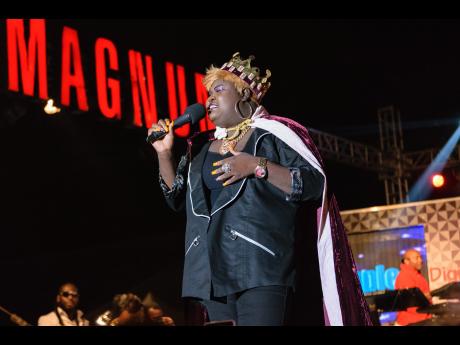 Jamaica is a land of many festivals - yam, jerk, reggae, among others, so advancing another one at this time should come with little surprise. Perhaps what may be astounding is the concept of dancehall with poetry. Magnum Kings and Queens of Dancehall is without doubt Jamaica's greatest poetry festival.

The curtain came down for the eighth annual competition of Magnum Kings and Queens of Dancehall on May 9 at a grand finale at the Kingston waterfront, before thousands of patrons. People came from all across Jamaica to be part of the coronation.

Ordinary people felt that they were part of this competition. They identified with it, they voted for their favourite contestants week after week, they took possession of it, and certainly declared their ownership.

But what was so attractive about this event, if not magnetic, in compelling ordinary Jamaicans to see young, neophyte deejays in a contest? The media played an important role for sure, but alongside that, we are suggesting that the affinity is largely because of the sincerity and intensity with which the entrants make their delivery, the clash of wits, and the undeniable entertainment from the power and venom of the spoken word from budding folk poets.

Dancehall, like its forerunner, reggae, came from the ventricles of poor and oppressed Jamaicans, and was always rejected, attacked and treated like an anathema by elite Jamaicans or their apologists. The genre survived because of its sheer aggressiveness, cultural power and determination of the Jamaican masses to be faithful to their indigenous roots. The foot soldiers developed a hydra-headed survival strategy that was strong and pervasive, determined and feisty, as the spirit that defines the Jamaican underclass.

This new Jamaican art form has evolved from being a physical space where people would meet for jollification, drinking and dancing, a place which could be an actual room, the back of a shop, a real hall, or even just a fenced area specially prepared for adult conviviality. That was dancehall then. Dancehall today has evolved into a new phenomenon; it has become a people's lifestyle, world view and a culture.

It is no longer a place you go but a thing you do. It is a music, terpsichorean, haute couture, language and modus operandi. It is a reality that resides in the hearts and souls of its supporters. It is indeed an expression of a new outlet and authority.

At the centre of a dancehall session, amid the mesmerising acrobatic dancing, merriment, video shooting and drama, is the deejay. He or she has risen to this stardom of controlling the microphone in an extremely competitive environment because of a keen musical air, lyrical dexterity and the gift of the gab. The deejay never loses sight that he must at all times 'ride di riddim like a lizad pan a limb'.

The 2015 Magnum Kings and Queens of Dancehall ended with lyrical fireworks between Ffrench and Triple A, the two top female contenders, and Lava Vein and Devin Di Dakta, the men who were left standing. Check out some of the lyrical ammunition:

Triple A you a duppy

Watch it mek mi load up back mi Browning

Waterfront a me a di Don da da

But tonight mi nuh have no madda

Mi gut big but a it mi use fi defend mi

Bounce a gal when mi

A mi di bwoy a call doctor fish a

because him gal fren steam mi dung this morning

Mi lyrics dem heavy like when a big gun shoot

But all in a station mi kick dung suup'

Mi run ina di school wen him sidung in a class and a chat,

Now everybody pass and a chat

But what is a poem? A poem, in its most elementary form, is a metrical composition usually concerned with feeling or imaginative description. To ask what happens in a poem is not asking what it is about, but rather, how it goes about being a human re-enactment of a human experience. It is safe to say that a poem is hardly ever about what it seems to be about. Many readers/listeners are unable to grasp the poet's duplicity.

Many have been socialised to think that the ivory tower or some other far removed haut monde institution is the most likely repository for the experience, elegance and power of good poetry, so when the nugget of gold appears from behind the zinc fence or the street corner of the garrison, or even out of the deep rural bush of other communities, it is dismissed simply as garbage or gibberish.

The deejay practitioner is indeed a poet emerging from the bowels of the massive and returning a source of energy, entertainment and joy to his people as he builds bridges with his human voice and the art of clever language. He lives by his 'lyrics'. And we recall that the term 'lyric' is derived from a form of ancient Greek literature defined by speech presentations with musical accompaniment of a string instrument known as the lyre. The Jamaican wordsmith who is today chatting lyrics on a rhythm is undoubtedly a new breed of poet and part of that great literary tradition.

In closing, please allow a word of caution to the naysayers. Instead of throwing out the

baby with the bath water, let us challenge our schools, training agencies, and individuals with the necessary skill sets to get involved and invest in the creativity of a generation. Perhaps in the long run it will pay big dividends to all.

Love them or hate them, these street poets will continue to wax lyrical about love, sex and life on 'The Rock'.

- Timothy Bailey is a social anthropologist and an educator. Email feedback to columns@gleanerjm.com and caribedumag@yahoo.com