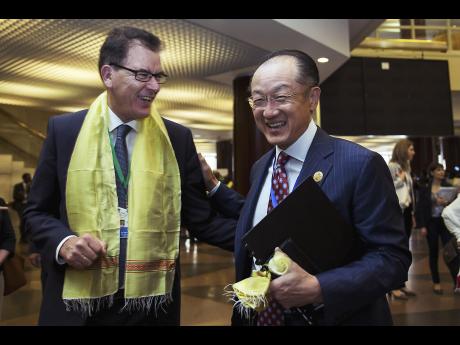 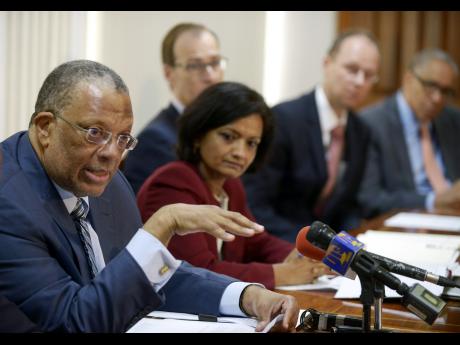 US President Barack Obama must take time to seriously reflect on that sober, well-reasoned letter sent to him by five members of Congress last week urging him to use his political clout to get the International Monetary Fund (IMF) to relax its demands on Jamaica.

Interestingly, it came at the same time Jamaica's finance minister was in Addis Abba not singing his usual neo-liberal tune , but making a clarion call for the international community to pursue a "vigorous review" of its policies governing concessionary aid. Phillips was speaking at the United Nations Third International Conference on Financing for Development, where he joined other countries in calling for more concessionary aid to middle-income countries like Jamaica, which don't currently qualify. The Economic Commission for Latin America and the Caribbean used the meeting to press demands for CARICOM to reach an agreement for the Caribbean Development Bank, the International Monetary Fund and the World Bank to have a gradual write-off of total multilateral public debt. In turn, beneficiary countries would make annual payments to a Caribbean Resilience Fund that could be managed by the Caribbean Development Bank to address natural disasters, finance climate-change adaptation and mitigation, and boost social development.

Phillips himself told the conference in Ethiopia that between 1994 and 2014, nearly US$30 billion of the Caribbean's budget had to be used for reconstruction as a result of damage caused by natural disasters. IMF programmes don't take these things into consideration and there is no fund to deal meaningfully with these issues.

Those who believe that merely applying neo-liberal methods can solve our developmental challenges in this small, open, heavily trade-dependent and indebted region are simply engaging in nonsense on stilts.

The five friends of Jamaica in the US Congress gave Obama some stark facts in their letter to him last week making their case for adjustments to Jamaica's IMF programme. The requirement of a 7.5% primary surplus makes Jamaica the country bearing the most severe adjustment of this kind in the entire world. (No, we are not more indebted than Greece) "Its interest burden is among the world's highest(8% of GDP)." And hear this: "Interest payments to multilateral financial institutions surpassed multilateral loan disbursements in 2012 and 2013. Last year, Jamaica paid US$136 million more to the IMF than it received from it!"

The congressional friends of Jamaica further told their president, "Jamaica's crushing debt burden has contributed to it being the only country in the Western Hemisphere to have had negative growth in per-capita income for the past two decades. The country's recovery continues to stall ... . The nation's poverty rate has doubled since 2007." Make no mistake about it: There have been significant gains under the Government's economic reform programme. I am sure Peter Phillips did not have temporary amnesia when he was in Addis Ababa. But he is bright enough to know that we need an IMF-plus programme.

Clearly, the pleas for growth and our angst over anaemic growth have reached far and wide, and important friends of ours are listening. Hope our freedom-loving, human rights-centred friend in the White House is heeding, too.

The congressional friends say, "The time has come to revisit the terms of Jamaica's IMF programme. We believe that the IMF should lower Jamaica's budgetary surplus threshold, among other measures, and that the IMF and the multilateral development banks should urgently consider extending the maturities of the Government's current loans." People like Dr Damien King would say that Obama should trash that letter and give Jamaica no help to kick the can down the road yet again. It's about time Jamaica deal with its problem of unsustainable debt and macroeconomic disequilibrium, he would say.

But we should not think that asking for concessionary financing or for some kind of resiliency or stabilisation fund is necessarily opposed to fiscal prudence. It is not an either-or situation. We must stop advertising and glorifying our ignorance of development issues by talking nonsense about these calls being one and the same as begging, cap in hand.

The Gleaner elevated a monumentally silly letter written by my friend, Michael Dingwall, as Letter of the Day on Wednesday. The Gleaner has been the most trenchant neo-liberal crusader in Jamaica, more purist than Milton Friedman and Friedrich Hayek, and more protective of the Holy Grail of neo-liberalism from would-be violators.

The paper would find favour, therefore, with the sentiments expressed by the letter writer who is outraged by Jamaica's lobbying to get concessionary financing for countries classified as middle income. "Why is it that we must always be a people that (sic) like the world to take so much pity on us to the point of always feeling sorry for us and giving us more handouts? We always have our leaders telling us we are a proud people. How can we believe them when they are on this determined quest to get the world to see us as too poor too help ourselves?" This is a manifestation of colossal ignorance of development issues.

For the Michael Dingwalls of this world, let me quote from the IMF itself. Min Zhu, deputy managing director of the IMF, told that same Addis Ababa conference last week: "We know that developing countries are best placed to drive their own development. We know that sound macroeconomic policies are essential to help mobilise resources and use them efficiently and effectively." Yes, we know that, and that is the neo-liberal mantra. But we know more than that. The IMF deputy managing director knows more, too, and he went on to say: "But we also know that developing countries cannot do it alone. The international community has a responsibility to create an enabling environment for sustainable growth and development ... ."

In that same speech, he mentioned that the IMF would expand access to concessionary facilities by some 50%. Is the IMF encouraging fiscal irresponsibility? Is it disincentivising countries from carrying out macroeconomic reforms, knowing that concession only encourages "laziness" and a "cap-in-hand" mentality, while poor countries' leaders corruptly fritter away their countries' resources? Even the IMF recognises that some countries need more than austerity. The point Jamaica and other middle-income countries from our hazard-prone region are making is that the IMF and the World Bank's net is not cast wide enough. They have to consider more than just the Heavily Indebted Poor Countries or low-income nations. Middle-income countries like Jamaica have severe challenges that demand as much international attention and priority. This is impatient of debate.

Hear what the IMF says again in the paper issued for that Addis Ababa conference titled 'Financing For Development: Enhancing the Financial Safety Net for Developing Countries' (July 2015) The paper acknowledges: "Developing countries' efforts to achieve sustainable and inclusive growth remain vulnerable to global volatility in the form of external shocks, unpredictable sudden stops, and reversals of capital inflows and significant commodity price volatility. Enhanced access to Fund financing would provide them with greater flexibility to meet balance-of-payments needs as they pursue inclusive growth and poverty reduction, and ease the pressure to tie up costly resources in low-yielding reserves." It's a pity the Congressional Black Caucus did not see this paper to quote it to Obama. This is the IMF itself talking!

So the mother of all neo-liberal institutions, the chief Washington Consensus institution, is saying that in addition to all the songs that Damien King, The Gleaner and other neo-liberal choristers are singing every day, there need to be international, exogenous mechanisms to bring some harmony to developing countries like Jamaica. We need balance-of-payments support and should not have to threaten our growth prospects by submitting to inflexible IMF diktat. We should not have to further bleed our economy to get support for crises manufactured elsewhere. This is fundamentally unjust. It is a moral issue, as Thomas Pogge has pointed out in some brilliant books on global poverty and justice.

Peter Phillips was bang on in Addis Ababa last week: "Countries like Jamaica ... heavily dependent on trade with an economy heavily burdened by demands of a limited resource base and closely tied to the fortunes of large economies ... are severely dislocated and are still feeling the effects of the global recession." He went on: "The global recession could well have retarded efforts to achieve the Millennium Development Goals" --not just our fiscal irresponsibility. He must speak this way at home, too.

Do you realise that the Great Recession cost the North Atlantic o between US$20 trillion-US$35 trillion in lost production? Do you know the US Congressional Budget Office itself says US real GDP will never return to pre-2008 levels? Do you know cumulative output losses in relation to trends up to 2007 stand at 78% of a year's GDP for the US and 60% of a year's GDP for the eurozone? Then what are its effects on countries like Jamaica? I hope President Obama has been checking his mail.