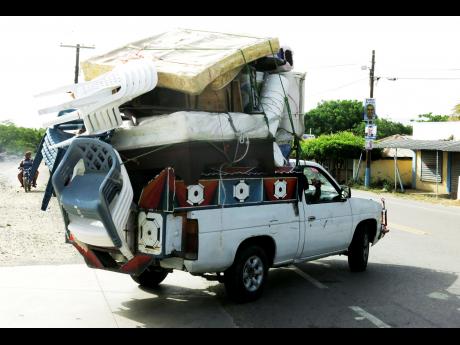 AP
In this June 25 photo, a moving truck loaded with furniture approaches the border with Haiti, in Dajabon, Dominican Republic. Thousands of people from Haiti or merely of Haitian descent arent waiting to find out if they will be forcibly removed from the Dominican Republic now that the deadline has passed to apply for legal residency.
1
2

Recently, one of our morning dailies was cheerfully reporting 'Dom Rep not 'rounding up' Haitians', according to that country's ambassador here who had called a media conference on the matter. The other paper was dismally reporting, 'Food For the Poor rescues Haitians expelled from Dom Rep'. Both papers would, of course, know the journalistic principle of hearing from the other side and from the independent authority in a matter.

Ambassador Jose Tomas Ares had taken objection to the Gleaner editorial, 'Xenophobic Dom Rep' (June 26, 2015) and written a letter of rebuttal before his media conference.

The basic facts of the case as set out by the editorial are hardly a matter of dispute and were not seriously rebutted by Ambassador Ares: "Until a decade ago, persons born in the Dominican Republic were automatically citizens of the country. In 2004, the automaticity of birthright was changed in law. The arrangement was enshrined in a new constitution of 2010, which required that citizens be born to parents of whom at least one is Dominican and the other living in the country legally. Three years later, the Dominican Republic's Supreme Court retroactively applied the arrangement to 1929. "The upshot," The Gleaner fires off: "hundreds of thousands of people stripped of their citizenship."

Most of these people are Dominicans of Haitian descent - and black. In his defence, the ambassador advises that 11 per cent of the Dom Rep population is black, 73 per cent are mulattoes, and 16 per cent are white. The Gleaner is of the view that: "Few will doubt that this law is aimed primarily at black people of Haitian descent, who the mostly brown, mixed-race 'Dominicans' have historically held in contempt."

The Washington Post, in an older editorial, 'The Dominican Republic's discrimination against Haitians', proffers pretty much the same view of the situation: "Haiti and the Dominican Republic, uneasy neighbours on the island of Hispaniola, share a tangled and contentious history, by turns violent, cooperative and exploitative. That is the background, though hardly an excuse, for an unconscionable decision by the highest Dominican court that strips at least 200,000 ethnic Haitian migrants of any claim to citizenship, including those born on Dominican soil decades ago."

The Post continued: "The court's decision enshrines the deep-seated racism and discrimination suffered by Haitian migrants and their children, who have worked back-breaking jobs in Dominican sugar-cane fields and construction sites for many years. It leaves the migrants stateless, lacking even the certainty that their children can receive an education ... . Tens of thousands will be left in legal limbo, including those who have never set foot in Haiti and speak no Creole, Haiti's main language."

"For many years," the Washington Post posted, "the children of Haitian labourers born on Dominican soil were denied official documents on the grounds that their parents were 'in transit' -- even if they'd been working in the country for decades. A constitutional amendment in 2010 codified that systemic discrimination."

Independent Haiti invaded and militarily occupied the Dominican Republic for 22 years in the 1820s-1840s, imposing harsh and oppressive rule and was only expelled by counterforce in the Dominican War of Independence.

In 1937, in an anti-Haitian pogrom in the DR, perhaps as many as 200,000 black-skinned people were massacred. The slaughter, carried out by dictator Rafael Trujillo, targeted Haitians, along with Dominicans who looked dark enough to be Haitian - or whose inability to roll the 'r' in perejil, the Spanish word for 'parsley', gave them away.

Writing in the Miami Herald, Raymond A. Joseph, born 1931 in the Dominican Republic of Haitian parentage, recounted how his parents fled to Haiti after the 1937 massacre. He only got a birth certificate in Haiti and chose Haitian nationality at age 18.

"By mentioning 1929," the 84-year-old writes, "the court pointed fingers at the US. It was in the 1920s that Haitian workers were trucked to the Dominican Republic by US sugar interests to do the back-breaking job in the sugar cane fields. The US occupied Haiti from 1915 to 1934 and the Dominican Republic from 1916 to 1924. That facilitated the informal human trade without documentation.

"The development of the Dominican sugar industry depended on cheap labourers from Haiti who were housed and guarded in the bateyes, those makeshift camps with rudimentary facilities. It was akin to slave labour."

History, colour and economics have combined to generate a great deal of bad blood between these two countries which need each other.

But there are two factors at play in the matter which our anger over any anti-Haitian, anti-black xenophobia must not be allowed to obscure: 1. Every country has a right to protect its borders against illegal entry and to regulate immigration into its territory. 2. Every human being has a right to a state and to citizenship; and there are certain international protocols for determining state and citizenship.

Ambassador Ares has pointed out: "The system that governs the acquisition of nationality in the Dominican Republic is not based on jus soli or jus sanguinis, but it is a mixed system, which is unified and complementary."

Jus soli refers to the right of anyone born within the borders of a state to the nationality or citizenship of that state. As an unconditional basis for citizenship, it is the predominant rule in the Americas, but is actually rare elsewhere. No European country now grants citizenship based on unconditional jus soli. And only around 30 of 194 countries grant citizenship at birth to the children of undocumented foreign residents.

Ignoring any deliberate racist xenophobia for the moment, the heart of the Dom Rep-Haitian citizenship problem is the state of statelessness being created not for fresh migrants from Haiti, legal or illegal, who are obviously Haitians, but for people who for generations going back to 1929 have been born in the Dominican Republic and, for all practical purposes, are Dominicans. Except without official documentation, which, part of the story clearly says, has been deliberately denied them while they have been allowed to settle in the country and to contribute their labour across generations.

Declaring transparency, Ambassador Ares said the activities of his country are coordinated with several international agencies. The OAS is now intervening. CARICOM, and Jamaica in particular, could play a very useful role as active international mediator bringing a great deal of respect from both sides to the table. Serious and comprehensive fact-finding needs to be done to determine the scope of the problem and a solution sought within the framework of international law, an assessment of the reality on the ground, and humanitarian concerns.

While the OAS itself has been fence-riding on the issue, the Court of the Inter-American Human Rights Commission of the Organization of American States has twice ruled, in 2005 and again in 2014, against the Dominican Republic in cases related to their treatment of Dominicans of Haitian descent.

But regarding the government of Haiti and Haitian migrants as innocent black victims, and the government of the Dominican Republic as xenophobic and anti-black brown villains, is too simplistic an answer for a lasting solution to the simmering citizenship and repatriation crisis.