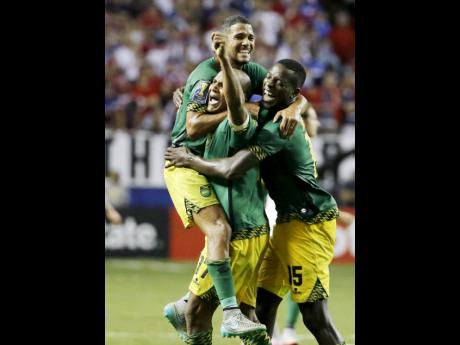 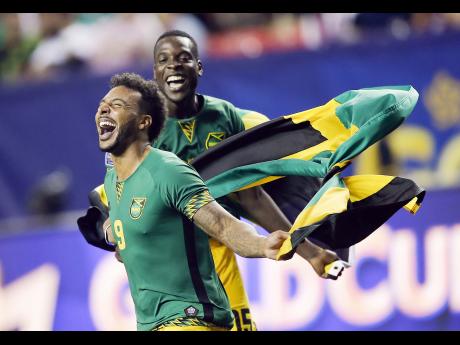 A week to go before Emancipendence, I am dusting off my gold and green on one of the few occasions that I compromise on my Negrophilia. Doubtless, I am very ecstatic over the semi-final victory over the USA in the CONCACAF Gold Cup.

It's not because I have bought into the narrative about David and Goliath. First of all, the USA is not our enemy and we are not as small in sports as we think. Moreover, the analogy is another of the evidence of how our minds have been tricked over the centuries, because the famous biblical battle did not take place. It was an uneven fight in which David, as he did on other occasions later, cheated.

Come on! A sling was the equivalent of a gun at the time, and the Philistine was so burdened under his armour that he couldn't get close to David. Fighting an enemy from a distance is not a duel; it is an assassination.

Still, like all the six million Jamaicans living here and in the diaspora, and the close to four million Panamanians, we are looking to humiliate the Mexicans who were handed a victory by American referee Mark Geiger, who seemed to be counting radiation while bringing the game and his country into disrepute. Some 85.95 percent of fans on NBC Sports say his near-last-second penalty call was wrong. Red Stripe and white rum shall conquer Corona and tequila later today.

Nonetheless, one lesson we, as Jamaicans, who are committed to Brand Jamaica need to learn, from the Americans, is how to project an image of ourselves that, though inaccurate and larger than life, is believed to be true. With the most powerful media in the world, Americans have done a wonderful job making the world, especially American citizens, believe that it is the centre of the world and that they are a world sporting power.

Soccer, a word which is actually British and not American, is the true global sport, played by 200-plus countries. And despite the high CONCACAF ranking of No. 4 in 2006, America has never been a dominant world power in the sport. Thus, the Reggae Boyz, who stood out against the South Americans, Paraguay and Uruguay in marginal 0-1 losses, then almost cleaned up a Messi Argentina in the COPA America, must have signalled that the only one-love that would occur against the USA would have been Bob Marley's song.

Honestly, I am more nervous about Jamaica's 4x100 men's team beating the USA next month than I was about the match on Wednesday. Furthermore, in the game the USA played against Haiti, they looked vulnerable, despite the Haitians playing in a foreign language.

ESPN is doubtless the global sporting giant, having displaced ABC. Both networks project well, and with the world's largest economy and more than 300,000,000, residents, including some well-camouflaged Jamaicans living illegally or under others' names, they can create the illusion of being the best. And truthfully, they are such a large country and economy, most Americans can afford to live in that bliss of not knowing. After all, more than 60 per cent of Americans have never been outside the USA. And they don't need to. Therefore, the reality of America's sporting dominance is good for them although they have to close their eyes to see that.

However, there are very few sports played by the majority of nations, where America is the dominant nation. Take the great American game, baseball. I am a Miami Marlins fan for life, but I cracked up when my professor invited me to watch a game after he found it incredible that a melanised Jamaican fellow knew the 1888 baseball poem, 'Casey at the Bat', written by Ernest Thayer. I was totally amused, and he, being an anthropologist, was too, that the World Series of Baseball was played among 30 teams from the USA and Canada.

Nonetheless, there is indeed a Baseball World Cup, played from 1938 to 2011, and a World Baseball Classic, played between 2006 and 2013. Between the two tournaments, comprising around 16-22 countries, the USA has won only four titles, while Cuba has won more than 25.

Of course, the National Football League (NFL) is even more amusing, because it includes only American teams. Yet, the Super Bowl champions are the world champions. And it continues: The National Basketball Association (NBA,) with my Miami Heat, has only 30 teams, from fewer than half of the 50 states. However, the champions are 'world champions'.

Only track and field perhaps gives the USA true bragging rights, and it is true that they have dominated the sport in many ways. However, let us not play the fool; Jamaica has every reason to consider ourselves the sprint capital of the world.

Importantly, America's media do not spend their energy tearing down their country and creating exaggerated views of its travesties. They skilfully manage or even hide some of the things for which they might be embarrassed and oftentimes focus on other nations where the problem is not as bad.

We, on the other hand, relish in believing the worst about ourselves, even when data and our own observations tell us otherwise. No one can be trusted to write the correct narratives about ourselves but us. It is for that reason that in the past few articles, I have focused on what the data say about us and the US, despite the hyper-real images created about the two countries. Yet, when confronted by the international and American-generated data about us, Jamaicans who actually live here are incredulous. Slavery has done a wonderful job with us and continues to do so.

Happily, the Boyz did not listen to the 'experts' who clearly didn't see that them in the Copa.