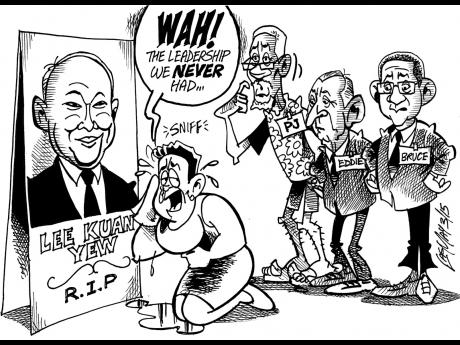 In Jamaica, 'elections' provide an illusion of democracy. These facades are Narnia-style gateways to five years of totalitarian rule, during which the accountability meter remains at zero and citizens' views are ignored with impunity.

Totalitarian rule (a.k.a. 'dictatorship') is the natural consequence of lack of accountability, and Westminster government is unaccountability's pinnacle. Democracy, properly so called, is government by the people for the people. Jamaican 'democracy' is government by the party, for the party, with limited popular consultation twice per decade. This is dictatorship by political consensus. Opposition parties don't complain. They wait their turn.

It's a myth that Lee Kuan Yew's brief 1960s Jamaican visit had anything to do with Singapore's subsequent economic success. Lee Kuan Yew's economic model was based on close observation of other nations' follies AND on lack of political opposition. Vision, ruthlessness, patience, courage and political invulnerability were his success tools.

In a 2001 BBC interview about his book From Third World to First, Lee revealed himself a lateral thinker who consistently put Singapore ahead of future competition. His economic model was 'relevance'.

Q: How do you define the First World, and why'd you want Singapore to be part of it?

LEE KUAN YEW: ... We haven't made it to [World Bank's] list of advanced countries yet, but if you go by GDP figures per capita, then we've made it into the First World. [The Book's Title] summarises [Singapore's] transformation from a [British Empire] trading outpost that could've perished with the end of the empire, as so many other trading outposts perished, [which] had to remake itself and become relevant in post-World War II world of many independent nation-states. We just about made it. We could easily have failed. If we hadn't made it then, I doubt we'd make it now. If we'd thrown away the chances that came our way in the 1960s, '70s, '80s, to restart now would've been very difficult. You had to pre-empt certain positions. Becoming a hub, becoming a container-port hub, becoming a hub for financial institutions and transactions; somebody else would've done it, and we can't play catch-up.

Jamaica had those same chances. We preferred bailouts of losing entities to getting a jump on globalisation. In 2013, we started TALKING about logistics hubs. We're still talking.

Q: I'm intrigued by your use of "relevant": Singapore had to become relevant. What do you mean?

LEE KUAN YEW: Countries that're agricultural can, at a low standard of living, sustain themselves. You can be self-sufficient; the money economy is a relatively insignificant part of the total economy. Singapore never was an agricultural country. When the British came in 1819, they found a fishing village of about 120 people ... . They turned it into an emporium, a Freeport; within three years they had 5,000 traders ... from the region. The population grew with trade; we packaged products from the region, sent them back to Europe, brought goods from Europe, broke the packages here, broke bulk here, sent it out to the region. With independence of the various component states when the empires broke up ... everybody wanted to do their own trading. We could easily have withered on the vine. We had to make ourselves relevant to the world, in this new situation of independent nation states, each wanted to deal direct with the Europeans, the Americans, and the Japanese. Each wanted to have the best airport, best seaport and best telecommunications. If we didn't make ourselves competitive before we knew the word, before it was in common use ... we wouldn't have survived. We weren't relevant. So being relevant to the world and as the world changes, being relevant in spite of those changes, is the business of living ... .

Despite persistent worldwide signals, Jamaica still depends on agriculture even as we're less capable of providing agriculture's lifeblood, namely, water. Despite modern trends towards 'free-trade' groups, we're still hankering to be a preferred First World trading outpost. Instead of trying to be different, first, and best in something new, we've spent 50 years campaigning for elections. 'Democracy' triumphs. Jamaica withers on the vine. We're as relevant as rotary dials.

Q: [When] you were in England, ... a Labour government [tried] to take control over the commanding heights. There's appeal in the idea of a mixed economy. I believe you considered yourself a socialist [then]. What was the appeal?

LEE KUAN YEW: I wouldn't say I consider myself a socialist. I was convinced it was a civilised system of government. When I was a student there in the 1940s, they passed the National Health Service Act. I went to the optician to pay for my glasses and the optician said (this was in Regent Street), "No, sir, just sign here." ... I signed; free glasses, free dentists, free doctors. After a while, [The system] threatened to go broke, so they put a prescription charge; ... a token charge just to keep prices down ... .

Subsequently, it was obvious it didn't work. These are scarce resources. You've got a limited number of top-class surgeons or doctors; [it's just not practical to] promise everybody they're entitled to the same treatment ... [but] they can't dismantle it now because it's too popular; it's gone into the national psyche ... . But you'll queue up for hip replacement, for non-urgent surgery, and private-sector practice begins to grow, where you'll get top-quality doctors and nurses and [post]-operative care if you pay. So we learn from watching what went wrong ... .

WARNING: Jamaica, don't wait for our fatally flawed 'no-user-fee' system for public health care to embed itself in the 'national psyche'. It's a creature of Jamaican democracy's buy-votes imperative. Abolish it.

Q: Can you remember any other examples of nationalisation in Britain and what you thought of it [then]?

LEE KUAN YEW: They nationalised coal. There was a coal shortage ... . There were the railways. When you do that, you become the provider of a buffet ... it's called the buffet syndrome. The food is there; take what you want; pay a token price. You've paid your taxes? Well, this is for you. And the waste is incredible ... . So watching it fail, we started working on [making] people think twice. We [must] subsidise health; ... education, housing. These are basics if you want people to perform effectively. But ... take health, for instance, what we did was don't promise you same treatment, same choice of doctors or nurses or class of wards ... . If you go to A, we don't subsidise, you pay the costs. Then you have a room to yourself, air-conditioning; choose your doctor/surgeon. You press the button; a nurse will come and give you water or medication. If you choose B, you may share four to a room and be subsidised up to 60 per cent of the cost. If you choose C, it's eight or 10 to a room, and we pay ... 90 per cent of the cost ... . That way, we've kept a check on the waste.

Lee Kuan Yew believed in long-term solutions for small nations' development problems. He didn't learn that from Jamaica. Jamaica, however, should've learned from Singapore decades ago. Is it too late? Can we catch the runaway 'relevance' train while playing stupid political games with Westminster governance?

Jamaicans, time isn't on our side. In 1989, I listened to Finance Minister Seymour Mullings announce Caymanas Park would be divested within six months. In 2015, government still owns and operates a revenue-guzzling gambling business. Why? Peter Phillips has announced more deadlines for its divestment than there have been local government election postponements. That's one example of 25 years of unaccountability. How many more will it take before we insist on constitutional reform to make future governments accountable? Or, will we be content to 'vote dem out' twice per decade in perpetuity?

If we don't act now, I pray that when Jamaicans' patience expires, Maxie Romeo's prophecy, "Heads a go roll down Sandy Gully", doesn't come to pass.