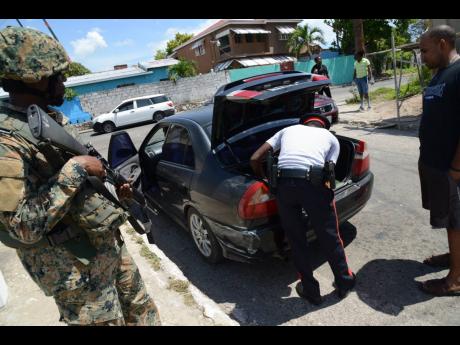 Rudolph Brown
Members of the Jamaica Defence Force and the Jamaica Constabulary Force conduct a search on Greenwich Road in Kingston after a state of emergency was announced last year in the Corporate Area. In Gordon Robinson’s view, Jamaican governments have not tackled the roots of crime, like so many other problems.

On August 6, 2019, Jamaica will be 57 years old. After 57 years, we still maintain a colonially imposed governance system imported wholesale from Westminster, itself created to appease subjects clamouring for an oxymoron – ‘democracy’ in a monarchy.

Accordingly, Westminster remains an unstructured concept whose precepts can’t be found in any legal document but is incongruously based on an ethereal principle of ‘parliamentary sovereignty’. Brainwashed, befuddled, and bamboozled by 400 years of British rule, Jamaica manfully tried to sardine these foreign ideas, developed over 10 centuries of foreign culture, into a written Constitution to govern a small, identity-confused society.

We’ve never recovered. The error was swiftly identified, however obliquely, by Norman Manley, but we’re yet to understand his message. His 1967 farewell speech has been repeatedly misquoted as a call for economic independence, but Manley actually said: “ And what is the mission of this generation? … It is … reconstructing the social and economic society and life of Jamaica.”

Manley recognised that the Constitution he helped impose on Jamaica needed to be reconstructed to promote economic and social justice.

But 52 years after he drew that road map, we still

- have prime ministers and party leaders imposed on us by an elite few.

- operate a de facto dictatorship whereby every crucial governance decision is essentially authorised or made by the PM.

The result is government by a few for a few. Chaos, crime, and massive corruption were the unsurprising results leading to more than 50 per cent of the population surrendering to disgust and disillusionment. The ultimate result is their non-participation in Jamaica’s sham ‘democracy’ based on stubborn, anti-choice philosophy.

An appropriate 57th birthday gift would put Jamaica on a path to constitutional reform by 60 to include popular vote for the PM and party leaders; an elected Senate; a constitutionally defined minimalist Cabinet; an independent public service; preappointment parliamentary vetting of important public officers; a judiciary independent of Cabinet and managed by the Office of the Chief Justice; anti-corruption laws specifically targeting nepotism and cronyism; and an independent anti-corruption agency with its own enforcement arm.

Jamaica can’t achieve social and economic justice without reconstruction of its colonially imposed Constitution. Unless it gives citizens real choices and real participation in governance, no reconstruction exercise will be effective.

After 57 years, social services are what a famous transport boss of blessed memory might call “a chronic”.

Health facilities are a shambles. Hospitals and clinics only produce positive results because of tireless, committed, compassionate, and caring service given by Jamaica’s brilliant, innovative medical professionals and staff, none of whom are properly thanked or compensated. Some of these unsung heroes are punished for their service by sick hospital buildings. Citizens’ choices of healthcare options are non-existent.

Education is like a newspaper puzzle where examination names are shuffled to disguise Jamaica’s undereducation epidemic. That many of our children manage to escape as functioning adults (some at a high standard) is testament to their tenacity, initiative, drive, and parental support, but, with very few exceptions, has little to do with the ‘education’ available at our schools.

We continue to treat teachers as second-class citizens when they should be the most qualified, highest-paid public servants in Jamaica. Fundamentally, we continue to assess educational success on exam results that test students’ ability to memorise and regurgitate instead of their life skills. We provide one education for all. Teachers, parents, and children have no choice.

National investments in social security are mishandled, misappropriated, and dissipated while senior citizens are treated like nuisances and children ignored or abused. What’s the status of NIF’s investment in Braco Hotel? If Government won’t tell you, I will. What’s the real story behind the short-payment of PATH contributions to a leading secondary school? Why are government pensions minuscule and delayed? Why are pensions still taxed?

Instead of a politically convenient ‘no-user-fee’ policy at hospitals, why isn’t all healthcare free for the elderly? When will reasonably comfortable, affordable, assisted-living facilities be available for senior citizens? Look here! Seniors aren’t begging for anything. They’ve made their contribution to YOUR comfort and the public services YOU enjoy by decades of hard work and payment of taxes. Their reward should be choices as to how they spend their declining years. Instead, they have NO CHOICE but to be mendicants.

Of course not! But, this one needs context. The world isn’t as safe as it was 57 years ago, and it would be utopian nonsense to expect Jamaica to be any different. Threats to personal safety have evolved rapidly with technology and as fundamentalists become desperate to retain old-fashioned notions of religious, political, and national borders. Also, the world economy has changed, resulting in greater inequality and unfair disenfranchisement that can result in beliefs that scamming, fraud, and even violence is justifiable reprisal.

So the issue isn’t whether changing times come with greater threats to personal safety. It’s how Jamaica addressed these threats that any graduate of Stevie Wonder’s school of social studies could’ve seen coming. The answer is the square root of zero. As import duty evasion became widespread tax evasion, Jamaica increased tax rates and persecuted PAYE taxpayers in nonsensical attempts to make up the shortfall.

As ‘bandooloo’ evolved to drug smuggling and gun-running, Jamaica met this with ‘hard policing’ by a corrupt JCF which, by and large, simply ensured its piece of the pie whose burgeoning existence proved that crime pays. As lotto scamming and organised criminal enterprises (gangs) joined the party, and, armed to the teeth and high-tech operated, became the new normal, Government threw its hands in the air, abdicated its responsibility, and introduced permanent states of ‘emergency’ (aka military rule).

Because Jamaica failed to address 50-plus years of increasing security threats, Government, incapable of admitting that only long-term solutions can be effective or implementing any, shovelled its responsibilities to the JDF, creating an environment ripe for a military coup should the army become disenchanted with the Government.

These ineffective, lazy, dangerous, repressive crime-fighting regimes have been imposed on us without consultation or consideration of any coordinated, multifaceted alternative. Just like during slavery, Jamaicans find their human rights treated with contempt, and support for the inexcusable abrogation of those rights has been by trick, aided and abetted by undereducation (especially in civics) and ingrained tribalism.

Channelling slaves of yore, many compete for house-slave positions. Disdain by house slaves for field slaves is the default attitude while hostility and derision are distributed by the gallon to those who rebel. Loyalty to the Master is paramount. Choice is disloyalty.

The saddest part is that at the charade’s end, unless the Government addresses the need for social, economic, and governance reconstruction, Jamaica is unlikely to be any safer than when it began.

So after 57 years, Jamaicans have less choice than when colonised. Christianity, fundamentally based on God’s gift of free will, refuses to concede choice, especially to women and more especially regarding the condition of their bodies. Christian fanatics often cite Deuteronomy 30:20 in support of their anti-choice position on abortion. But Deuteronomy 30:15-20 (full context) is consistent with God’s gift of free will and promotes personal choice regarding one’s own life.

In Deuteronomy, God urges us to use free will to make a choice that’ll allow us to live. All cells are living things, so if medical advice reveals that living cells of any kind in your body endanger your life (directly or indirectly), God encourages you to choose YOUR life. Most important, we’ve been given CHOICE and the ability to choose.

After 57 years, a pastor can repeatedly rape a socially and religiously unprotected 12-year-old girl, eventually impregnating her, without social or religious investigation or disapproval until he belatedly pleads guilty to reduced charges, but Maurice Tomlinson can’t live in his own country with his legally married husband without facing constitutionally and religiously entrenched discrimination driven by fear, intolerance, and bigotry. But if he lied to his country about his sexual orientation and tricked some unenlightened woman into marrying him, he’d be welcomed into the Church with open arms.

So, on Thursday, we celebrated emancipation from physical slavery, but we remain mentally enslaved by politics and religion.

Despite all this, Jamaica is still the best place to live. Family is still everything; friends priceless. Jamaicans are the most helpful, genuine, caring people who seem to appear when needed like magic. Jamaica is still a beautiful country with glorious scenery, magnificent architecture, and ever-improving infrastructure. But no nation can progress or prosper unless its citizens have real choices.