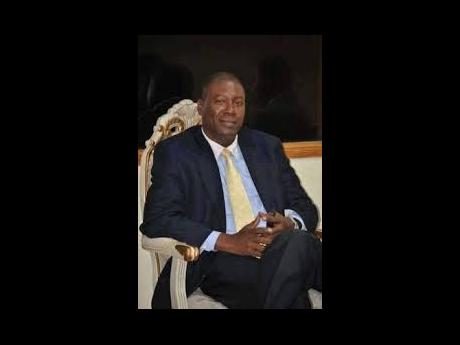 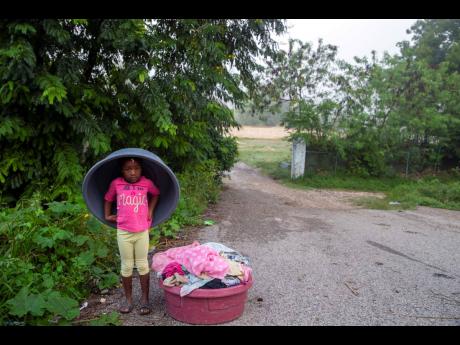 AP
Malaika Pierre, 5, waits for her mother to wash clothes in the Meille River, in front of the former UN base in Mirebalais, Haiti, on Monday, October 19, 2020. Ten years after a cholera epidemic swept through Haiti and killed thousands, families of victims still struggle financially and await compensation from the United Nations as many continue to drink from and bathe in a river that became ground zero for the waterborne disease. 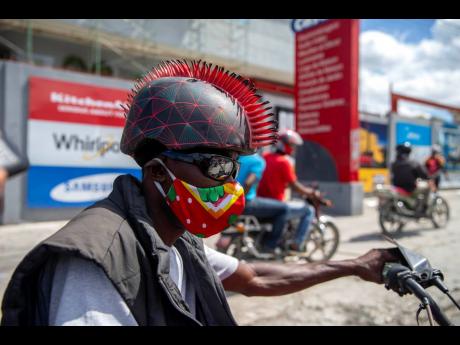 AP
A motorcyclist wears a protective face mask and a mohawk helmet as he takes part in a protest to demand the resignation of President Jovenel Moise in Port-au-Prince, Haiti, Saturday, Oct. 17, 2020. The country is currently experiencing a political impasse without a parliament and is now run entirely by decree under Moise. 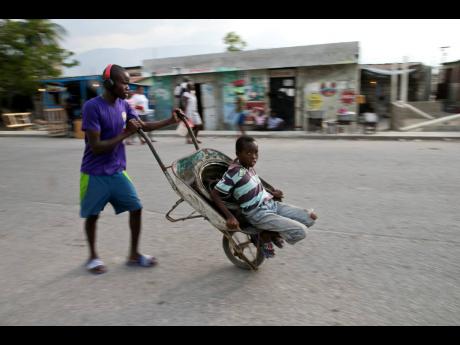 AP/ File
In this December 2019 photo, a young man pushes a wheelbarrow home as his little brother takes a ride on it, in the Cite Soleil slum of Port-au-Prince, Haiti. The two youths are going home after helping their mother by carrying items to sell in the market.
1
2
3
4

As Haiti battles the global economic fallout from COVID-19, another story has been brewing as well. A series of investigations has confirmed the long-standing suspicions of most Haitians: corrupt business people have been profiting from blackouts that have roiled Haiti for decades.

Recent reports from the Haitian Anti-Corruption Unit have detailed cases whereby US$194 million was stolen from the Haitian government by corrupt ‘oligarchs’ overcharging the state for oil. As disclosed in the reports, seven million gallons of imported gasolene and diesel ‘disappeared’ from state reserves between March 2010 and May 2020.

This is the tip of a very large blackout iceberg that investigators believe has seen nearly US$4 billion swindled by an elite group of corrupt actors, dubbed ‘Haiti’s oligarchs’, through legacy contracts, overbilling, and straightforward theft over the past 13 years. During his time in office, President Moïse has made ending graft a priority – and, unsurprisingly, the benefactors of systematic corruption are fighting back.

The concept of state capture, whereby the business of government is controlled by a small number of corrupt monopolies, is nothing new in Haiti. Corruption among some top-level Haitian business interests in key sectors intersecting with government and politics has been prevalent for decades. This, combined with the growing influence that the ‘oligarchs’ hold in some political circles, and their casual willingness to deploy violence to preserve their position, is lamented as making it practically impossible to create change or tackle the brand of corruption that plagues Haiti.

It is a well-known fact to political insiders that nearly all government contractors over-inflate prices and defraud the state. A culture of fear has set in amongst government employees. The cost to the state, national funds, and the people of the country is enormous. The bigger question is – who, exactly, is benefiting from these practices?

As seen on Dmitri Vorbe’s social-media accounts, part of the missing funds is enjoyed on yacht vacations and jet-setting international travel. The former vice-president of Société Générale d’Énergie, S.A. (Sogener) – and a key figure implicated in the wrongdoing – appears unabashed promoting a luxury lifestyle afforded by funds long believed and now confirmed to have been defrauded from the state while the country suffers regular and rolling devastating blackouts. The report highlights that Vorbe was awarded a corrupt and illegal eight-year government contract by the previous administration. Over a decade later, Sogener was running on government funds while owing the state US$194 million in debt incurred between June 2012 and March 2019.

It’s not only been revealed that Sogener amassed a large amount of government debt for the purchase of fuel and failed to supply the contracted power to the Haitian people, but Vorbe also imported generators – which are used by so many Haitians as a back-up source of power – thus benefiting doubly from the countrywide blackouts, whose cause he contributed to. After 13 years of state corruption, under President Moïse’s leadership in the face of personal threats and a lot of political risks, the corrupt Sogener contract was cancelled and the power plant taken back into public ownership.

Another beneficiary is Reginald Boulos, a Haitian business magnate whose father served as health minister during the infamous dictatorship of Jean Claude Duvalier. Boulos is understood to have benefited from his father’s political ties, and during his own time as president of the National Chamber of Commerce and Industry of Haiti, he amassed a wealth of assets including luxury hotels, car dealerships, and supermarkets. Among other unsavoury activities, leaked US Embassy cables revealed that Boulos distributed weapons to police and financed paramilitary leaders in return for the provision of a private security force. These privately financed police units were involved in the 2018 massacre of the civilian population in the La Salin neighbourhood of Port-au-Prince.

The oligarchs are not going quietly. President Moïse took aim at their activities and their pocketbooks, and we’re witnesses to the response. Reginald Boulos is involved in a well-funded coup against the president, calling for his exile and rallying heavily armed gangs and paid protesters on Haiti’s streets. Others have undertaken similar tactics: funding political interests; creating artificial shortages of food, fuel, dollars; stoking chaos; and driving powerful information campaigns.

But President Moïse hasn’t shown any sign of abating. Recently, he instructed Haiti’s National Regulatory Authority for Energy to issue open, competitive tenders for private operators to take over regional grids and develop microgrids for rural communities, with a focus on gas-powered and solar projects. This is a major departure from the old way of doing business in the sector – characterised by bloated legacy contracts gobbled up by violent monopolies. The president is also attracting foreign investment to Haiti, which will accelerate the dilution of the oligarchs’ hold on energy and other key sectors. He recently negotiated a US$150-million deal with Taiwan for an overhaul of the national grid and announced a strategic energy partnership with Turkey.

As seen in other countries battling entrenched corruption, breaking the fraudulent cycle is immensely difficult. For now, Haitian wealth and resources remain concentrated among less than one per cent of the population. In a country where 78 per cent of people live on less than US$2 a day, redistribution of wealth will undoubtedly be a long journey. President Moïse has taken the first steps along that road. Presidential elections are due to take place in 2021. Haiti will do well if the next administration is similarly unafraid to go toe to toe with the oligarchs.

- Patrick Chrispin is an advisor to the president of Haiti.