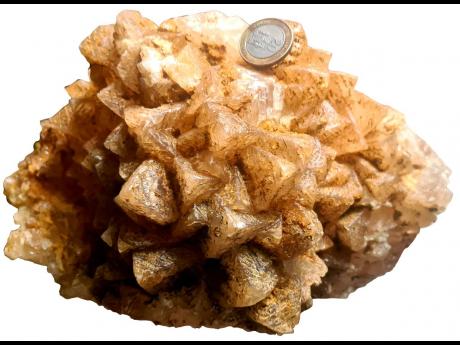 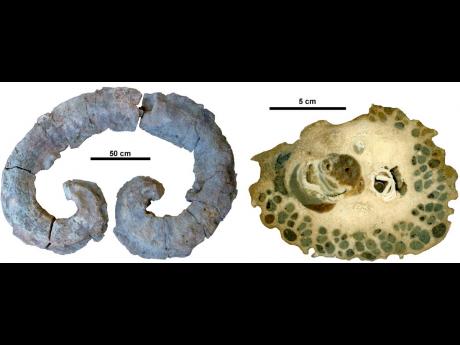 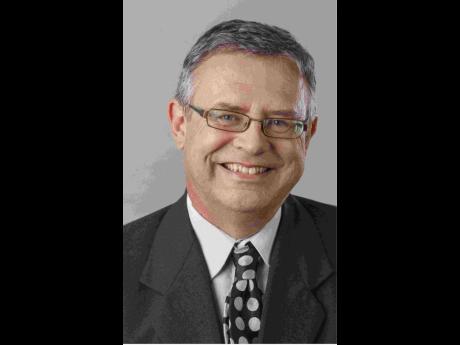 But should we have more symbols that reflect the physical aspects of the island? In the United States, each state has a state mineral and a state fossil, and it would be fitting for Jamaica to have a National Mineral and a National Fossil. These would serve to recognise the physical aspects of the island and also to highlight some of its remarkable geology. This would help to promote a better understanding of Jamaica’s physical environment in its schools and also its citizens.

A fitting National Mineral could be CALCITE (calcium carbonate or CaCO3). Two-thirds of the land surface of Jamaica comprises rocks belonging to the Yellow Limestone and White Limestone. These rocks are largely composed of calcite. Calcite also forms the stalagmites and stalactites that we see in the vast number of caves that occur in the limestone areas across Jamaica. The caves were formed by the dissolution of the limestone by underground rivers, and stalagmites and stalactites by the dripping of calcium-carbonate saturated water over millennia. It would seem that calcite would not only reflect the land across much of Jamaica, but would also be fitting for the underground water supply which is a vital resource in times of climate change. Very appropriate for the ‘Land of wood and water’.

Figure 1. Crystals of CALCITE (calcium carbonate or CaCO3). This specimen shows the dog-tooth spar morphology and came from a vein within the White Limestone on the North-South Leg of Highway 2000 in the parish of St Ann. Many people find these crystals and think that they are valuable. But the crystals are relatively soft (they can be scratched with a steel knife) and easily break along weaknesses (cleavage planes), so other than for their crystal form they are not valuable as semi-precious gemstones. Calcite (when pure as limestone) is used widely in the manufacture of steel, glass, toothpaste and medical pills. Twenty-dollar coin for scale. Specimen in UWI Geology Museum.

A suitable National Fossil would be the fossil clam (or rudist) Titanosarcolites (Fig 2). Titanosarcolites was named in 1924, but the first specimens were noted in the First Official Geological Survey of Jamaica (published in 1869) and the species (but not genus) was first described from Jamaica in 1897. Titanosarcolites is a common fossil in the late Cretaceous limestones of Jamaica and is an iconic fossil because of it large size and its strange form. Specimens reach sizes of more than two metres across and it was one of the largest clams (bivalves) to ever live (maybe the largest). The two valves curve like a pair of Persian slippers or a croissant, and it has a series of tubes that extend from the tips of the valves to the junction of the two shells that were used for sucking in water (like straws) to feed. As a strange, common, and distinctively Jamaican form, this would make an excellent National Fossil. [More information on Titanosarcolites can be found in Mitchell, Gunter and Mulder (2020) at the following link: https://authors.elsevier.com/a/1cKI773N%7E0Bjn.]

- Simon Mitchell is professor of sedimentary geology, Department of Geography and Geology, and director of research, The Earthquake Unit, at The University of the West Indies, Mona. Send feedback to simon.mitchell@uwimona.edu.jm.