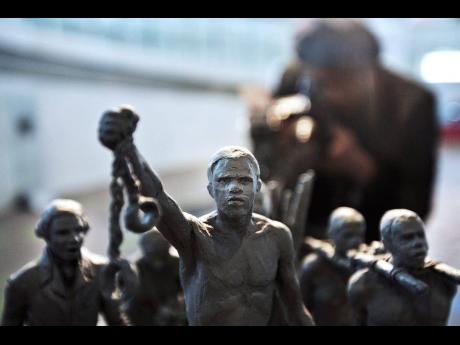 AP/ File
In this 2008 photo, a man photographs a maquette of a statue, at City Hall, London. 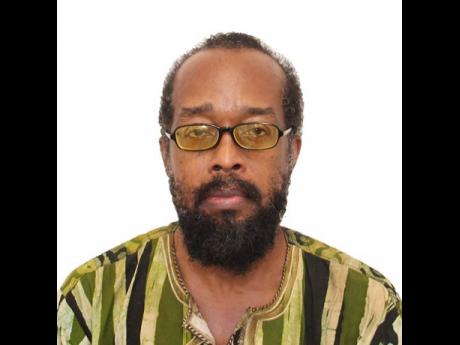 In this edition of Reparation Conversations, Michael Barnett responds to an opinion piece by St Aubyn Morgan published in the Jamaica Observer of April 12. Barnett outlines some of the many justifications for reparation for the trans-Atlantic trade in enslaved Africans (TTA), with a particular focus on Jamaica as a counter to Morgan’ piece titledm “Focus on nation building, forget reparation.”

I start by stating unambiguously that the chattel enslavement of Africans, the ultimate intention of the TTA, was a most terrible and heinous crime perpetuated against our ancestors that none should deny. Indeed, the horrors and indignities to which many of our ancestors were subjected are too terrible for most of us to conceive.

Further, this particular type of slavery was not comparable to previous types of slavery such as that on the continent of Africa, in ancient Rome, or even in ancient Egypt. The trading and chattel enslavement of Africans incorporated the automatic lifetime enslavement of consecutive generations for centuries until they were abolished. The enslaved Africans were deemed property, as opposed to human beings, and were subjected to the harshest of treatment.

Chattel slavery was undoubtedly the most brutal, the most savage, and the most inhumane form of slavery ever to be enacted in the history of humanity and should be considered in this light. For Jamaica alone, some 1.5 million Africans were imported by the British during the period of their involvement in the trading of Africans. At the time of emancipation in 1834, the population of African and African descent persons was only 300,000 (one fifth of the total imported) which should give us an idea of the level of mortality that occurred in this particularly horrendous type of slavery. Some even deem this genocide! This reason alone justifies reparations from our former colonisers, especially as the ideologies of their regime continue to have contemporary impact.

Another important point is that our ancestors were never compensated for the near two centuries that they toiled on the sugar plantations and other economic enterprises under the British regime. Contrastingly, the enslavers not only derived an immense amount of wealth from chattel slavery by not having to pay wages to their captives, but they were also compensated to the tune of £20 million by the British Government at emancipation for losing the free labour that had once been provided to them. Our ancestors got no such monetary compensation for their exploitation. To add insult to injury, after the Emancipation Act was passed in 1833, our ancestors had to toil for a further four years (1834-1838), down from six for those described as “praedial” because of their opposition, without any pay in what was deemed an “Apprenticeship Scheme”.

This so-called Apprenticeship Scheme that was masterminded by the British can only be described as one of the biggest ruses in history. This was a cleverly devised scheme to provide the enslavers in the British-colonised Caribbean with the equivalent of an additional £25- £27 million, extracted from our ancestors. Thus, the enslavers received an equivalent total of £45- £47 million in compensation when the Apprenticeship years are factored in. But the formerly enslaved never received any compensation, neither for the centuries of unpaid labour nor for the immense brutality and suffering that they endured during the process.

For those in England who argue that they are against the whole concept of paying reparations for slavery, what they should realise is that paradoxically, through payment of their taxes, they had been paying reparations already, only to the wrong people. The debt that the British government incurred in borrowing the £20 million to pay the enslavers in 1834 was only paid off in 2015 by English citizens and those of the Windrush generation that were domiciled in England over the last few decades. Now if something is not wrong with this state of affairs then tell me what is? Who really deserved to be compensated in the first place? Would it not be the enslaved who never received a penny for their labour over the course of two hundred years, rather than the enslavers who enriched themselves from the institution of slavery? If the owners were compensated, is it not morally unjust that the unpaid enslaved workers were never compensated?

Fundamentally, paying reparations for arguably the most historically nefarious and odious acts ever committed, the trading and chattel enslavement of Africans, is the right and moral thing to do; and no nation can claim to occupy the moral high ground if it refuses to do so, especially when it ended up paying the wrong persons in the first place.

Moreover, Britain has extracted a great amount of wealth from Jamaica, its former crown jewel in the Caribbean. According to Christopher Hill in Reformation to Industrial Revolution (1967), at the height of the British Industrial Revolution (the mid -1700s), Jamaica was the largest single exporter to Britain, the main base for the British based TTA, and it accounted for 11 per cent of all imports into Britain from the Western hemisphere. Eric Williams, in his much acclaimed historical master-piece, Capitalism and Slavery, also spoke of Jamaica’s contribution to Britain’s wealth. While this wealth was extracted by the so-called mother country, for hundreds of years, little of it (if any at all) has been ploughed back. Now would be as good a time as any to invest some of that extracted wealth back into Jamaica as part of a reparations package so that we too can improve our own infrastructure (our roads, bridges and railways), as well as build more schools and hospitals.

As a point of interest, the CARICOM Ten-Point Reparation Plan proposed by the CARICOM Reparations Commission in 2013, includes recommendations for a Public Health Programme, an Illiteracy Eradication Programme, an African Knowledge Programme, and Repatriation, among others, as some of the ways that the lingering effects of slavery and colonialism on our society could be ameliorated.

In conclusion, I wish to emphasise that reparations for slavery is not just about our ancestors being unpaid but also about considering the pain and suffering that they endured in the most brutal institution that ever existed in the history of humankind. A suffering, torment and mental anguish that in fact was so terrible that it left an indelible stain on all subsequent generations of African descendants. I, (and I know many reparation advocates would agree), feel that we owe it to our ancestors to not only remember their suffering, but also to recognise their resilience, their sacrifices as the Black survivors as we agitate for reparations.

Nation building while agitating for reparations does not have to be mutually exclusive. We are a nation blessed with talented, innovative, and creative persons and are more than capable of attending to both tasks simultaneously. As we double our efforts to further develop our nation, we can also continue to make the clarion call for reparation.

Michael Barnett is a board member of the National Council for Reparation (Jamaica) and senior lecturer in the Department of Sociology, Psychology and Social Work, at UWI Mona. Send feedback to reparation.research@uwimona.edu.jm.