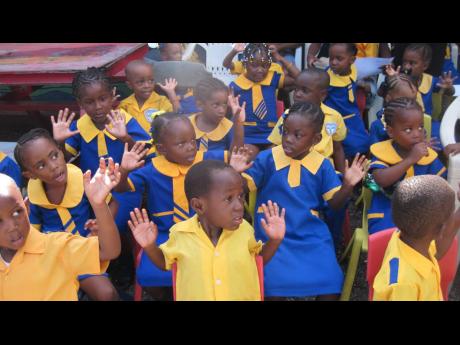 File
It doesn’t take a degree in astrophysics to know that the state of a country’s early childhood educational infrastructure is directly linked to the overall objectives of successive governments in Jamaica.

If our people were a bit more patient maybe we would allow ourselves to see the dots lined up and constantly connecting. Of course, there may be some of us who see good reason in the ‘virtues’ of impatience, especially in light of the security...

If our people were a bit more patient maybe we would allow ourselves to see the dots lined up and constantly connecting. Of course, there may be some of us who see good reason in the ‘virtues’ of impatience, especially in light of the security uncertainties in Jamaica.

The first big dot is presented in a recent review of early childhood institutions (ECIs) which saw the vast majority of these entities scoring low grades across a fairly wide spectrum of tests. Not surprisingly, many of the administrators of these schools cite poor resources in many areas.

The second important dot develops when many children move from the ECIs to low-rated, under-resourced secondary schools and they find themselves unprepared for course work from grade seven. When I use the term ‘low-rated’ I do so because these schools tend to repel top-class teachers instead of attract them.

The third very impulsive dot happens when those young school leavers are academically unprepared and untrained in and uncertified in any of the income-friendly trades. So they spend an inordinate amount of time learning the language of the streets and familiarising themselves with the humming subculture riding on the edge of criminality.

The fourth dot needs no descriptor as it finds itself comfortably placed in the ‘kill and collect, smoke and forget’ mantra while it skips between the raindrops of a crony’s wrath and a policeman’s bullet.

This country needs no new machinery to produce new dots. It doesn’t take a degree in astrophysics to know that the state of a country’s early childhood educational infrastructure is directly linked to the overall objectives of successive governments in Jamaica. Surely it can’t be blamed on policy indifference even though using that as an excuse and throwing in insufficient resources could be sold with skilful political marketing.

Way back in the 1950s, bright young women and some of their male counterparts would start a school in a remodelled board house or a school hall. Many of those untrained teachers utilised the discipline and the basic learning they secured from a somewhat workable elementary education system to aid in supplying affordable education to many of our infants and children.

Sometimes lunch would be a steaming mountain of warm rice with a slice of cheese perched on top. And a cup of awful-tasting powdered milk (USAID?).

Joke aside, what was the philosophical moment that drove education policy among some of our well-known political leaders? From the book Truth (2019 – Glynne Manley) Michael Manley, chapter 14 says, “One day it may yet prove to be an epochal contribution to social mobility and to opportunity, even with all the problems in education. In one stroke we changed the whole free place system. In 1957 or ’59, I forget which, Dad (Norman Manley) instituted the free place scheme, where instead of a few scholarships to secondary schools there were 3,000 free places a year.

MURDER FOR HIRE IN PARADISE

I should have long ago secured an advanced degree in criminology. Had it been in place, at the very least I would be able to explain at what stage of a country’s dangerous, long-term flirtation and love affair with violent criminality does it add ‘murder for hire’ to its perversion of a resume.

But then again an ability to understand a country’s evolutionary ‘slide’ into contract killing without the policy powers that government gives would be frustrating. All I would have to do to appreciate the difficulties is gaze on at our present set of politicians in the parliamentary driving seat.

Security minister Horace Chang is a plain-talking minister. Recently he made mention of the phenomenon of contract killing as if it was a newborn on the scene. Well, let us be fair to the minister. Even if he knew of it years ago maybe he was seeking out a trend line to ensure that he was not simply parroting street talk.

One of the realities of contract killing is understanding the extent to which it obeys the rules of the market. The vibrancy of the market must mean that demand and supply are in some sort of balance. Or it could mean that there is an excess of dirty funds in the hands of those who would prefer that their hands are kept clean.

Then of course, there has to be motive. It can be an attempt to collect on a long-standing monetary debt. The terms will have to be set in addition to the cash consideration. Maybe if the target is caught and despatched there is a bonus. If the rented gun has not been returned that is just another payday. If the lives of relatives are deemed expendable, then so be it.

Many of those in the dark underworld have long detached themselves from any sense of humanity. More that a few months ago the handsome man in his early 40s was warned that the pretty girl he was having a sexual relationship with was the don’s girl. He scoffed at it and bad-talked the don behind his back.

It took six bullets for the hitman to kill and collect.