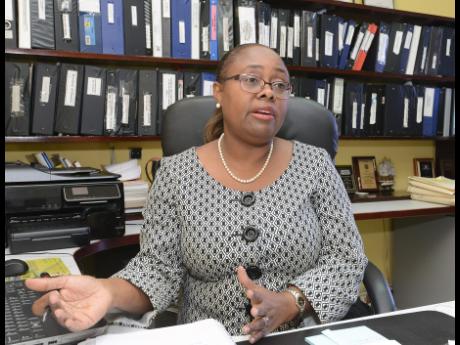 Struggling to meet its financial targets over the last seven years, the Registrar General's Department (RGD) says it has started to rebound and is now aiming to change its net income from a position of loss to profit.

The RGD was given the green light by Government to increase its fees in 2014 after operating for the last 10 years without an adjustment in service cost,

For the first quarter of the new financial year, the RGD has surpassed its income target by nine percentage points. The agency's monthly average income is $65 million and the department is projecting that it should end the fiscal year with a revenue intake of $780 million.

Like the Companies Office of Jamaica, the RGD is the only other executive agency at this time which is not dependent on financing from the Consolidated Fund.

Since 2007, the RGD has been fully funded by its revenues.

When The Gleaner visited the RGD recently, some customers spent less than 30 minutes to complete their applications for birth and marriage certificates, a huge difference from a time not so long ago when members of the public spent half of a day or longer in queues to complete similar transactions at the department.

Chief executive officer of the RGD, Deirdre English Gosse, said the department has made significant progress from a period when customers gathered at its gate at Twickenham Park from as early as 4 a.m. to access its services to a point where tents were pitched daily to accommodate large numbers of persons who converged on the department to do business.

"Now customers come straight in at the RGD and they are attended to. We still have a far way to go because my vision for the RGD is to establish computer kiosks and you come in and research the information on the computer and when you find the registration number, you apply right there, pay for it at the cashier and within 15 minutes you are out with a birth certificate or marriage certificate in hand."

She said the journey to get there is a challenge because the digital records of the RGD only date back to 1993.

"All the records from 1993 to now are digital," she stressed, adding that there are pockets of digitisation before 1993.

This summer, said English Gosse, the RGD is carrying out a project to digitise more records at the department.

"We are excited about it because it would mean that, hopefully, a substantial amount of our records will be indexed so that they can now be searchable."

The RGD received mixed reviews from customers The Gleaner interviewed, with some giving the agency the thumbs up for "professional and efficient" service while others who experienced problems in completing their transactions made suggestions as to how the department could further improve its service.

Customer-service satisfaction surveys are conducted by the department, and where there are areas of discontent, the RGD says it takes remedial action.

"It's my dream to have top-class service provided to the Jamaican clientele," said English Gosse, who noted that almost every Jamaican comes in contact with the RGD.

Said English Gosse: "The first taste of identity starts at the RGD. You start with us and you end with us, and in-between if you get married, you have to come back here to get a marriage certificate."

The RGD currently employs 350 people, coming from a staff of 20 when the office was located in the heart of Spanish Town. At present, the RGD operates out of its headquarters at Twickenham Park, St Catherine, and has established nine regional offices and a mobile team that takes the service to Jamaicans living in remote areas.