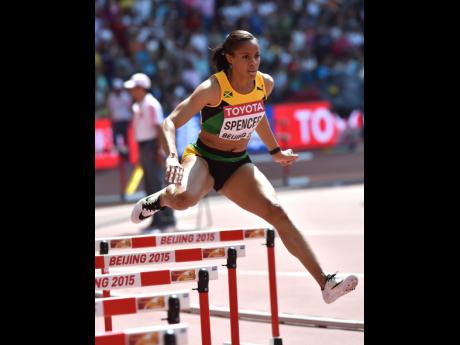 BEIJING, China: It’s her big chance for a big medal and she is ready to take it.

Since bursting on to the scene and developing into Jamaica’s leading 400m hurdler, Kaliese Spencer has suffered a miserable run in finals at the major championships – the Olympic Games and the IAAF World Championships.

However, despite a season that has been interrupted because of injury, Spencer is still on course to end her medal drought at major championships despite facing a field full of possible pitfalls and capable threats.

Spencer will line up alongside fellow Jamaican and training partner Janieve Russell in the women's 400m hurdles final at 7:10 a.m. inside the Bird's Nest, knowing that it's medal or bust.

However, there's a sense of calm about Spencer these days, something she attributes to her faith, and it has become quite clear that the athlete has exorcised the lingering effects of her past failures on the big stage and is confidently looking towards an assault on the medal podium.

She has certainly had some practice.

Spencer, whose first international medal also came in Beijing at the IAAF World Junior Championships where she won gold in 2006, has taken home silver in the 400m at the 2014 World Indoor Championships and gold in the 400m hurdles at the Commonwealth Games in Glasgow, Scotland.

As important as those may be, Spencer knows that at the end of the day, it's what she does at the World Championships and the Olympic Games that will truly be used as her markers.

"I'm calm. When God is in control, everything is different. I am just working hard and allowing him to take control," Spencer said in the build-up to the race.

Her coach, Stephen Francis, is also expecting her to deliver her best performance in a final here - and she might need to if she is to beat the defending champion, Zuzana Hejnova, to the gold.

Hejnova, who has lost the last three races to Spencer and who the Jamaican has beaten in 17 of their 26 competitions, is back in form and looks bent on retaining her title here.

American Shamier Little, the world leader with 53.74 seconds, has not been entirely convincing here but she is another threat to the Jamaican, as are Sara Slott Peterson and Cassandra Tate, who have been solid.

Spencer would have been the clear favourite had she not lost a few weeks because of injury, but given her class and what seems like a new mental approach, watch Spencer finally conquer her hurdles and add top-tier silverware to her collection.