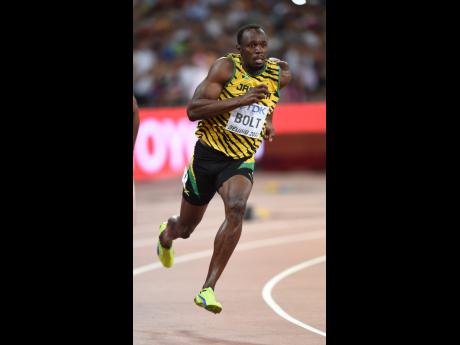 Usain Bolt will be chasing history today and if his words are to be believed - which they should be - then American Justin Gatlin will be chasing him to the line, as the big Jamaican looks to add another bullet point to his already impressive CV at the IAAF World Championships in Beijing, China.

His 100m World title already pocketed for the next two years, Bolt was extremely comfortable in winning his 200m semi-final in 19.95 seconds, his first sub-20-seconds time since the final at the 2013 World Championships in Moscow.

Bolt, who says he is expecting another battle with American Justin Gatlin, whose 19.87 seconds makes him the fastest qualifier heading into the final, says retaining his 200m title is his number-one priority, underlining its importance to him from a personal level.

"It would be a big deal for me. I'm looking forward to that. I'm just trying to get it done and that's my focus," said Bolt, when asked how much importance is placed on entering the record book as a four-time 200m World champion. "I'm just looking forward to going out there and having a good time.

"Everybody knows that is what it's going to be (Bolt vs Gatlin), but I'm looking forward to it. This is my favourite event; it's my event. It means a lot more to me, so I'm ready to go!" Bolt assured. "I am a great competitor and it's all about focus now and showing the people that when it comes to the big time, I'll always show up and get things done."

running 20.19 for second place in his heat. But there was no joy for the silver-medal winner from the last World Championships, Warren Weir, who crossed the line in seventh place in 20.43 in his heat; and Julian Forte, who clocked 20.57 for eighth.

Jamaica will also be counting on its quartet of Stephenie-Ann McPherson, Novlene Williams-Mills, Christine Day and Shericka Jackson in the 400m final, who face the starter at 7:40 a.m.

The island is the first country to have four women in a 400m final at the World Championships or Olympics.