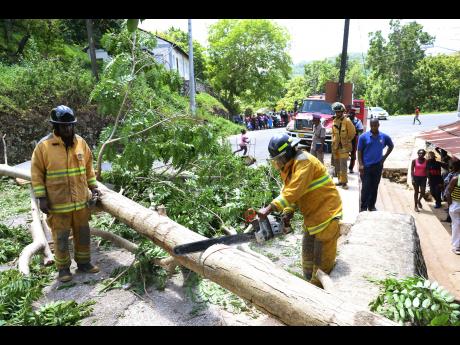 Jermaine Barnaby
Fire personnel helping the police to clear one of the many roadblocks allegedly mounted by Comrades opposed to sitting Member of Parliament Raymond Pryce in North East St Elizabeth yesterday. 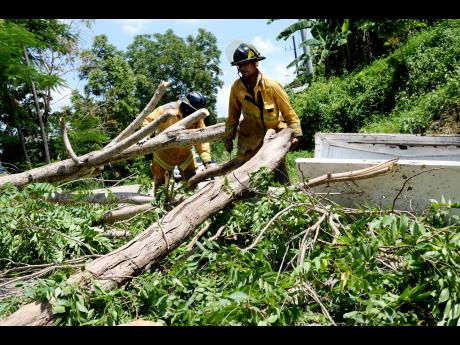 For the second time around, fire personnel are clearing this roadblock mounted in North East St Elizabeth yesterday. 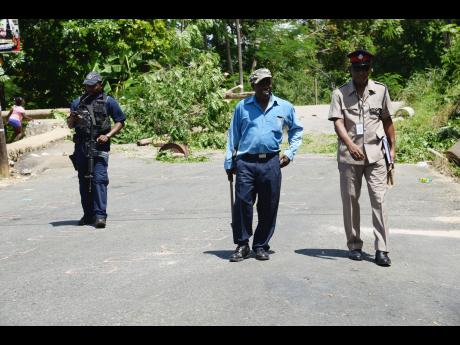 'Pryce must go' is the sign written on the road that these members of the police force are walking on as they make their way past one of the many roadblocks mounted in North East St Elizabeth yesterday.
1
2
3

The battle over who is to represent the People's National Party (PNP) in North East St Elizabeth took an ominous turn last Friday, when it moved into the courts and became uglier yesterday as it played out in a nasty way on the streets of the constituency.

While supporters of sitting Member of Parliament Raymond Pryce were in the Supreme Court in Kingston trying to get a judge to block the attempt by Evon Redman to challenge him, opponents took to the streets to voice their demand for the election to take place as scheduled.

From early yesterday morning, police and firefighters were kept busy removing huge trees that were felled and used as roadblocks in sections of the constituency. And even as one roadblock was cleared, it was remounted, seemingly by ghosts, as no one admitted to knowing who was cutting down the trees and blocking the roads.

Many residents claimed that they woke up and saw downed trees blocking the roads.

The St Elizabeth police confirmed that there were multiple roadblocks in Union, Content and Mount Pleasant, even as they remained on high alert in the township of Santa Cruz.

"We have been monitoring the situation since then," said Harrison.

There was no member of the party leadership at the constituency or regional level present among the people in Union, a PNP stronghold, when our news team arrived.

Nudged by The Sunday Gleaner, members of the group who readily declared their support for the party complained that this is the third time the selection conference was being postponed.

"They postponed it two times to make the court postpone it a third time," said an obviously irate woman.

But apart from the occasional angry outburst, the people were silent as they stood, seemingly at attention, and watched the cops and firefighters toil.

Although heavy vegetation and rocks blocked the roads, there was not a soul in sight in many instances, except for the occasional vehicle struggling to make it through narrow openings.

The imagery changed drastically in the district of Union in Balaclava. That road was entirely blocked by a huge cedar tree, preventing any form of vehicular passage.

A crowd assembled along with a strong contingent of police personnel.

With no walls available for protesting graffiti, the words 'Pryce must go' were written on several sections of the road.

Grave-faced residents watched in silence as police used machetes to clear the square under piercing heat.

The anti-Pryce Comrades were clearly not in a talkative mood, much less noisy.

The Sunday Gleaner approached a woman who refused to divulge her identity but described herself as a "born Comrade" who was furious with the leadership of the PNP.

She said that she is livid as the 28-day injunction would mean that Pryce would lead the constituency into the PNP annual conference next weekend.

According to the woman, she would not vote if Pryce remained as the party's candidate for the next general election.

"Him must go home now because he is not a man of his word," she said.

For her, it is high time that the constituency gets a home-grown person.

"Him behave like him own here, but him don't have any place here."

There were mumblings of agreement as she predicted that the fallout would be great if the party insists on sticking with the first-term MP.

Declaring that Pryce has failed to deliver on his promises, the woman predicted that vindictive-ness would rear its head if Pryce represents the party.

But even as the protesters continued their action, in Kingston, the Pryce backers were before Justice Bryan Sykes in the Supreme Court pressing their case for Redman to be declared ineligible to run.

While the judge did not rule on the substantive matter, he extended the 28-day injunction against the holding of the selection contest and ordered the parties to return before him next Wednesday.

PNP General Secretary Paul Burke, who the action is filed against, was not in court, and he told The Sunday Gleaner that the outcome of the court case was not important to him.

"Whatever the result of the court's proceedings, it's of no concern to me because the selection contest was postponed yesterday (Friday)," said Burke.

"Rest assured that whatever problems are in North East St Elizabeth will be fixed at annual conference, which is the highest decision-making body of the party and which has the power to remove, install and fix all problems involving candidate selection.

"And rest assured again, there will be no selection before annual conference," said Burke.