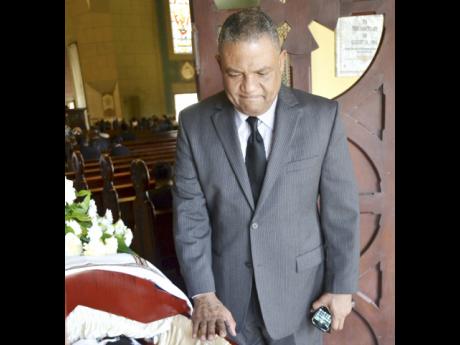 The bodies of several babies, most of whom never made it alive out of their mothers' wombs - stillbirths - were reportedly buried in a pauper's grave in the May Pen Cemetery yesterday.

Sunday Gleaner sources say between 60 and 80 bodies, taken from the morgues at the Victoria Jubilee (VJH) and the Kingston Public (KPH) hospitals, were buried by

representatives of Brown's Funeral Home, which is

contracted to dispose of the bodies, with the incinerator at the KPH out of commission.

When our news team arrived at the cemetery, persons there confirmed the burial but refused to allow us to see the grave, arguing that they did not have the authority to do so.

Later, head of the South East Regional Health Authority, Dr Andrei Cooke, told our news centre that he was aware of the reports of the pile-up of bodies and had demanded a report on the matter.

"I would prefer not to comment on the record but I can confirm that I have asked for a report," said Cooke.

However, recently appointed Health Minister Horace Dalley later confirmed that there has been a pile-up of bodies of dead babies in some public morgues, but argued that there was no cause for alarm as they were all stillbirths.

"Though most unfortunate, the little angels were not born alive," Dalley told The Sunday Gleaner yesterday, as reports surfaced that scores of bodies of babies were seen at the morgue at the Kingston Public Hospital last Friday.

With memories still fresh about the slow disclosure of issues surrounding the 19 babies, mostly, if not all, premature births, who died over a four-month period at the University Hospital of the West Indies and the Cornwall Regional Hospital recently, following outbreaks of the klebsiella and serratia bacteria, there was immediate speculation as news spread about the pile-up of bodies.

But Dalley was emphatic as he said, based on the reports he has received, "they were stillbirths".

According to the health minister, there has been a pile-up of these bodies since July 14, as affected mothers, clearly grieved at their losses, left the hospital and never looked back.

Dalley told The Sunday Gleaner that public hospitals are bound by law to seek out mothers of stillbirths to determine the course of action that should be pursued in relation to the bodies of their babies.

"I have checked and that is what I have been told. There are bodies there of babies whose mothers have not come back to take them for either burial or whatever," said Dalley.

He added: "There are still-births in the morgue and the hospitals are required to acquire burial orders for these babies if the mothers fail to return. The hospitals have been trying to contact the mothers from July, August, September until now, and that is the situation."

Dalley said some mothers just checked out of the hospital and left everything behind.

He added that if the authorities fail to locate the mothers, the State is required to take the necessary steps to carry out burials of the bodies.

"There are always stillbirths in every hospital in Jamaica, and so every morgue in Jamaica would have bodies, so there is no cause for concern or alarm.

"The State will take the necessary steps, and I have instructed the hospital management to try again to find the mothers who have checked out of facilities and have left stillbirths and have not come back."