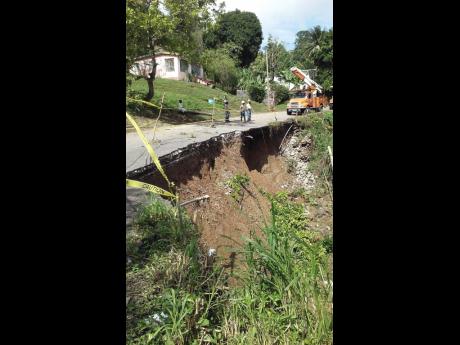 Gareth Davis
A section of the collapsed roadway in West Retreat, Portland. 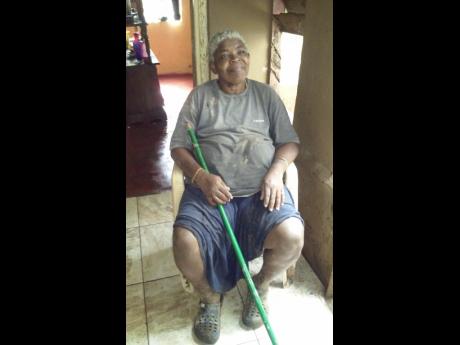 Gareth Davis
Gwendalyn Myrie, 63, at her home at Breadlane, Portland, which was ravaged by water from a nearby river.
1
2

Four houses were destroyed and 14 people left homeless after more than six hours of intense rainfall in the eastern parish of Portland.

The heavy rains, which started at 5 p.m. on Tuesday, pounded the eastern side of the parish. The situation was further compounded by a lengthy power outage.

"I had to abandon my house and flee to a neighbour's," said 63-year-old Gwendalyn Myrie, a homeowner and resident of Bread Lane in Portland.

"I was so afraid, as the rain kept falling heavily and the nearby river started to overflow its banks. Every single [piece of] furniture and electrical appliance has been damaged. This is the worst flooding that I have ever seen. I would gladly pack and leave, as with each shower, I worry about the possible damage."

Four bedrooms, a kitchen, a bathroom, and a dining room were inundated during the heavy rains, with furniture and electrical appliances, including TVs, a stereo, a microwave, a washing machine, and three DVD players, left covered in mud in Myrie's home.

A similar situation was seen at Breastworks, where two rivers met, sending a huge volume of water and debris into a three-bedroom house belonging to Bernice Gordon, who, along with two other females, had to flee their dwelling.

"We cried all night," said Gordon. "It was as if the sky opened. The rain fell heavily for more than five hours. This is just too much, and although we have experienced flooding before, this is the worst one," she added.

Yesterday, minority leader in the Portland Parish Council, Derron Wood, toured the badly ravaged areas of the parish to survey the damage.

"This is worse than I thought," commented Wood. "Houses were demolished and residents have been affected by the flooding. Some have lost livestock, including cows and goats, while others have lost chickens. I will be lobbying the member of parliament to see what assistance can be provided, through his Constituency Development Fund, to those affected. I am also encouraging those affected to visit the office of the Ministry of Labour and Social Security for assistance," he added.

The infrastructure of the parish was also badly damaged, as a section of the roadway at West Retreat partially collapsed and is only open to single-lane traffic. A downed utility pole in that area also resulted in a power outage leading into Fellowship and the upper Rio Grande Valley since 6 p.m. on Tuesday.