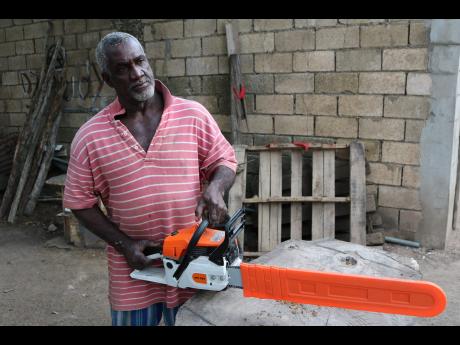 Christopher Serju
Leroy Aiken shows the counterfeit chainsaw he bought for $30,000 from two men claiming to be salesmen for the top American brand STIHL. 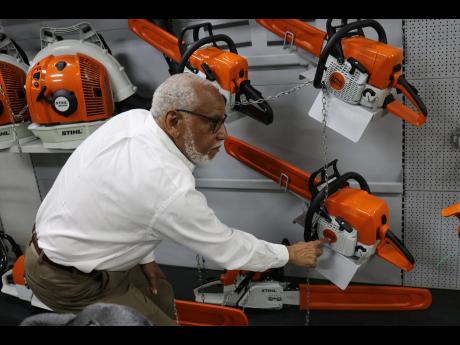 When Leroy Aiken's boss called him to the office advising that two men were selling top-of-the-line chainsaws at bargain prices, he wasn't particularly interested. But then when someone called Delta Supply Company Limited, authorised dealer for STIHL (a top international manufacturer of industrial equipment) and learnt that this bargain price was at least one third of what it might cost elsewhere, he was sold.

And so, even though he didn't have any immediate use for a chainsaw and coming up with the $30,000 was quite a sacrifice, he thought this was a worthwhile investment.

The fact of the matter was, the only reason Aiken even heard about this "too-good-to-be-true bargain" was because coworker Nathaniel 'Shaggy' Gordon just couldn't come up with the money to cash in on this sweet deal and in turn alerted his friend.

"A just because me never have the money can buy it, why me tell him bout it," Gordon disclosed during a visit to the offices of Original Bamboo Factory, which manufactures bamboo furniture and accessories.

That was sometime in late January to early February but when The Gleaner visited Aiken at home in Caymanas Estate, St. Catherine on Tuesday, the name brand product had still not been used. The problem is that his gasoline-powered chainsaw was a counterfeit product.

It was for this reason that Delta Supply put out a double truck advertisement in the Star newspaper on Monday, warning the public about two men who have been going around the country conning people into buying counterfeit industrial equipment, and in particular the fake STIHL MS 360 chainsaw and which they believe were illegally imported.

The advertisement reads in part: "It has come to our attention that foreigners, claiming to be in Jamaica for a workshop, are selling these machines at seemingly low prices in an attempt to scam buyers into purchasing defective equipment. Reports suggest these chainsaws malfunction quickly and unfortunately, neither Delta Supply Co. Ltd. Nor any of its authorised STIHL dealers are able to provide spare parts or repair services for these counterfeit items.

"Please note, only Delta Supply Co. Ltd and authorised STIHL dealers are permitted to sell STIHL merchandise. These machines are NOT STIHL products.

"Delta Supply Co. Ltd encourages members of the public who come into contact with these dishonest individuals to immediately report their activities to the police."

The advertisement also points out the following differences between genuine items and the counterfeit ones.

* STIHL logo on the blade

* STIHL logo on the body of the machine

On the other hand, the counter machines have fake serial numbers and do not have the STIHL logo on the blade or body of the machine.

Jonathan Swire, general manager of Delta Supply, explained that his company picked up the scam early into the new year after people started turning up in search of replacement parts.

"They come to us for parts in some instances and it's not really hard to explain it to them either. They'll open up the machine and show us which parts they want and then we have to say to them, we don't have any parts that look like that. We show them what the equivalent would have been in ours and it will be a different dimension, a different shape, a different weight, a different quality and clearly it wouldn't fit," Swire noted.

"So they are able to see that they really have been conned. So we are just trying to put this information out there and see if less and less people will get conned because we don't know long they've been here. We have spoken to our manufacturer who told us that they (criminals) have also done this in some other West Indian islands and Central America, the same characters - based on the description we gave them of these guys."

Meanwhile, Swire explained that while there are distinct differences between the genuine and counterfeit items, he could understand how the criminals are duping the public.

"They are selling products that look like STIHL. They look like our brand - they have the same colour scheme and what not, but they are clearly pirated products, counterfeit products. Because when you look on it there is no logo, that and the workmanship...the quality of it looks poor and it's clear they're trying to mimic the colour scheme of the product we sell," he said.