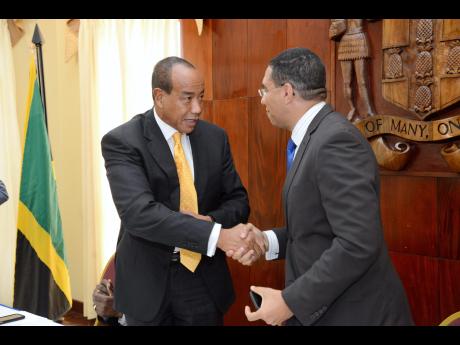 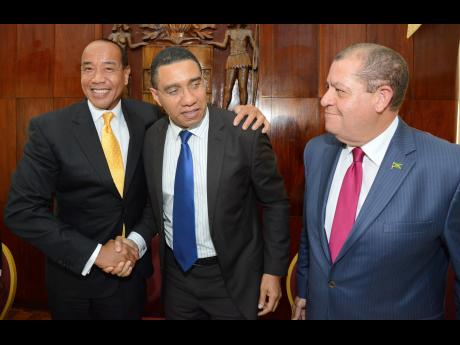 Business mogul Michael Lee Chin, who was yesterday named chairman of the Government's Economic Growth Council (EGC), has pledged to work tirelessly with council members and other Jamaican stakeholders to achieve economic growth of five per cent over the next four years.

"I am going to make the first pledge, but I'm going to ask all stakeholders in Jamaica also make a public pledge as to what their involvement in GDP (gross domestic product) growth is going to be," Lee Chin said.

"That's our pledge. We are going to work tirelessly to achieve that goal," Lee Chin said at the official launch of the council at Jamaica House.

He said he was taking on the challenge because firmly etched in his mind were the opportunities that Jamaica has missed over the years.

Noting that he was "confident that I will get a lot of help along the way", Lee Chin emphasised that he was "taking on this challenge because for too long, we have been verandah-talking. I am confident that if we all rally around the same vision, we will reverse the ugly statistics (of anaemic growth) over many years".

He said that in order to achieve the growth rate envisioned, "We need the involvement of every single small and medium-size enterprise, the energy of the youth, families, labour unions, the parliamentary opposition, students, teachers, professors, local investors, corporate heads, religious leaders, and the diaspora. If you are going to achieve sustainable growth, we need the involvement of everyone in Jamaica."

Chairman of the planning committee of the growth council Dr Nigel Clarke said the council, once appointed, is expected to consult widely with stakeholders from various sectoral groups both locally and abroad.

Following the consultations, the council will be proposing a series of initiatives to the Government and engaging in a period of negotiations with the Government about the ones it will eventually adopt.

Once the growth initiatives have been adopted by the Government, the council will be empowered to monitor their implementation across ministries, departments, and agencies.

The council, and particularly the chairman, have been tasked to update the prime minister on the progress in attaining the initiatives and to report on a quarterly basis to the Jamaican people, Clarke said.

He said that while the expectation is that there will be a number of proposals and suggestions, the council is expected to be predisposed to considering initiatives that have transformative potential to unleash growth and to create jobs.

A critical component of this will be the empowering of the Economic Growth Council, particularly the chairman, in order to secure investment opportunities for Jamaica.

"Unlike previous such initiatives that have been embarked upon, the task of the Economic Growth Council is not merely to suggest what needs to happen, but it is to detail the steps and the prerequisites that make the desired outcomes possible," Clarke said.

The council will consist of leaders from the private and public sector who will be appointed "in due course", he said. The council is expected to conclude consultations and finalise the set of initiatives with the Government within four months.

"The Economic Growth Council is a crucial initiative designed to put together a package of steps that not only describe what needs to be done, but how it needs to be done and will require the support of a vast array of stakeholders," Clarke said.

Prime Minister Andrew Holness said Lee Chin's task will be to build local and international support for the growth agenda in practical ways to bring large investments to the island.

He has also been asked to work with technical experts in the civil service to develop the initiatives "that we will be held to account for, to raise public awareness and public attention on economic growth, and to assist in the process of bringing to the attention of the Government where there are bottlenecks, roadblocks and obstacles to remove from the way and the path that the investors must travel to bring prosperity and jobs to Jamaica".

Referring to the growth council, Holness said: "It is not another layer of bureaucracy. It is meant to simplify, clarify, and expedite the economic growth policy."

The prime minister said, "We will, in the weeks and months to come, add other persons to the council."