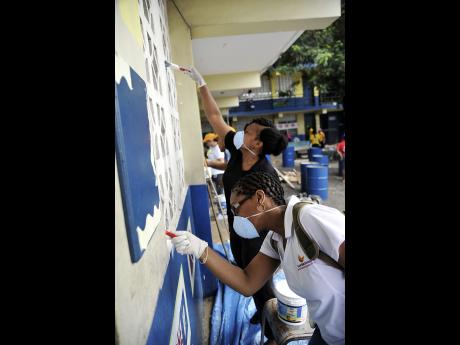 If the walls of the Victoria Jubilee Hospital could talk, they would probably be expressing profuse gratitude to members of the Jamaica National (JN) Foundation following a massive clean-up exercise that took place there yesterday.

The JN Foundation's objective was to focus on the Government's thrust of getting rid of breeding sites in light of the mosquito-borne diseases that have been plaguing Jamaica and the wider Caribbean. It was the same theme driving other clean-up activities that The Gleaner visited during its Labour Day tour in Kingston yesterday.

Rose Miller, grants manager at the foundation, told The Gleaner that as a corporate entity, they were big on giving sustainable contribution towards the development of country.

"At JN Foundation, this is a part of what we do. We are not afraid to get dirty, whether we are managers or not. We are partnering with the hospital to eradicate the debris and other breeding sites because we have to play our part as well," she said.

"Our Action Volunteers pride themselves on assisting persons. Sometimes you might not have money, but once you have willing hands, you can get much done, especially as it relates to the health sector. The Government cannot do it alone," Miller declared.

Jacqueline Ellis, acting chief executive officer of the hospital, was grateful for the contribution, also noting that the country was at risk of being greatly impacted by mosquito-borne diseases.

"Partnership is important in order for us to provide access to quality service that we pride ourselves on. Patient care is very important, and having JN partner with us on this Labour Day is significant," Ellis said.

"Just recently, I was watching a documentary that spoke to the number of persons who died as a result of mosquito-borne diseases, so as a health entity, we have to ensure that the place is kept clean and free of breeding sites," she continued.

A similar activity was taking place at Allman Town Primary School in Kingston as Guardian General Insurance Jamaica Limited partnered with the institution in enhancing its surroundings.

Kandi Lee Crooks-Smith, principal of the school, noted that it was a good day for education in Jamaica.

"What really stood out was the fact that before the holiday, representatives from the company actually came to the school to ask the students what issues they were having. The students are the ones who pointed out areas they think would require their assistance and attention," Crooks-Smith said.

"As such, they are here painting the outside of the school and they have also added hand rails to the stairways. They will also be improving our garbage-disposal space, putting drums in an outside area. This means the truck will not have to come on the school compound. That has had its set of problems due to the fact that the compound is small and the students having to inhale all that scent, so we are truly grateful," she continued.

President of the group, Karen Bhoorasingh, told The Gleaner that a major objective of the organisation was to assist schools across the island through their 15-in-five project. This means the group will spend $15 million in five years on projects.

"The students themselves told us what they wanted, and while we can't do everything in one go, we intend to support this institution as much as we can, because nothing is better than having students working in a clean and conducive environment," she said.

Juici Patties and the Optimist Club of Kingston Central also partnered with St Aloysius Primary School in Kingston, painting the rails and various facilities at the institution.