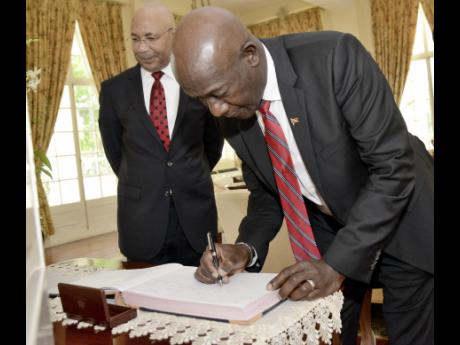 Rudolph Brown
Dr Keith Rowley, prime minister of the Republic of Trinidad and Tobago, signing the guest book during a courtesy call at King’s House yesterday. Looking on is Governor General Patrick Allen.

Ahead of a meeting today with members of the private sector, Trinidad and Tobago Prime Minister Keith Rowley has sought to mend fences with local stakeholders who have had strained relations regarding trade and the movement of Jamaican nationals into the twin-island republic.

"We see CARICOM as our market and we want you to see Trinidad as your market, because what we need to do to realise our potential is to maximise this little market of ours.

"Looking inward and attempting to chastise our manufacturers in any way serves no good for the interest of the wider population of Jamaica or Trinidad and Tobago," the T&T head of government declared.

Later in the afternoon, Prime Minister Andrew Holness told reporters that both countries have made significant progress in bilateral talks.

Rowley is in the island on a five-day visit to hold talks with Jamaican government officials, the private sector, the parliamentary Opposition, members of academia, among others.

In a terse statement, Holness said there were issues that both countries would have to discuss in greater detail. "In general, we have reached understandings on many of the critical issues that have faced us. I think we can definitely say that Prime Minister Rowley and I have developed a very good friendship and understanding."

Both heads of government discussed issues relating to the CARICOM Single Market and Economy, energy, and the free movement of labour. Holness said discussion on these issues would be concluded on Thursday, at which time a full statement will be made to the media.

During a statement to the media yesterday afternoon, Trinidad and Tobago's Minister of Foreign and CARICOM Affairs Dennis Moses said a dedicated facility to accommodate persons who have been denied entry into the country will be completed in another two weeks at Piarco International Airport.

In terms of persons who have breached the immigration laws of Trinidad, Moses said: "We have instituted mechanisms so as to allow a respectful, proper system to be put in place so that the turnaround of nationals of Jamaica and other countries would be a short one, and they can regain their countries of origin."

He noted that more than 100 immigration officers, including supervisors, are being trained.

New data released showed that the twin-island republic denied entry to 320 Jamaicans in 2015, almost two per cent of the total number of Jamaicans who sought entry into the oil-rich country over the period.