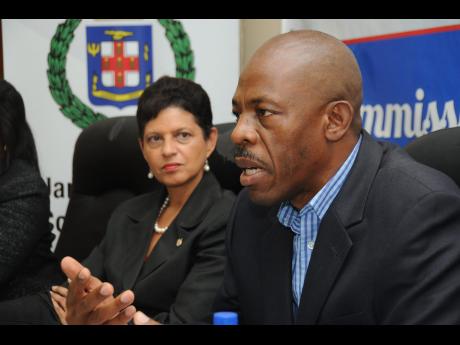 Jermaine Barnaby
Dr Carl Williams (right), commissioner of police, addresses the media as Dr Luz Longsworth, pro-vice chancellor and principal of the University of the West Indies Open Campus, looks on during yesterday’s signing of a memorandum of understanding between the Open Campus and the Jamaica Constabulary Force at the Office of the Police Commissioner in St Andrew.

Noting efforts to present a more professional police force to the nation, Commissioner of Police Dr Carl Williams said yesterday that with a rise in "intelligent crimes", there is need for more police personnel to receive greater academic qualifications.

In the push to achieve those qualifications, Williams welcomed the signing of a memorandum of understanding with the University of the West Indies (UWI) Open Campus, which will see the development of academic programmes and other educational initiatives to be executed through the institution.

"The truth is, police officers who join at age 18, especially if they join without a degree or without any tertiary training, the development on the job is not going to be sufficient," he said following the signing ceremony held at the Office of the Police Commissioner in St Andrew.

"They have to learn new things about what is happening in the world around them. Their world view cannot be what is provided by the Jamaica Constabulary Force ... ; they have to learn new techniques and know how to deal with persons at all levels. That is not going to come from the limited exposure they get working the streets and the police force," he said.

Noting that there are some 11,000 policemen and women in the force, he said efforts are under way to ensure that personnel have a balance of understanding what takes place on the ground and being academically qualified.

"There are more than 1,000 holders of degrees in the police force ... . You would have seen in the last few years that we are presenting a more professional police force to the public," Williams said.

"(Still) we are not discrediting those officers who might not have had degrees but displayed qualities that cannot be learnt in school - commitment, bravery, and good old common sense," he stressed.

Meanwhile, Dr Luz Longs-worth, pro vice-chancellor and principal at the Open Campus, said the institution would be working closely with the JCF to assess the needs that exist, indicating that with the rise in issues such as cybercrime, scamming and other activities, it is critical that officers are equally trained to deal with emerging issues.