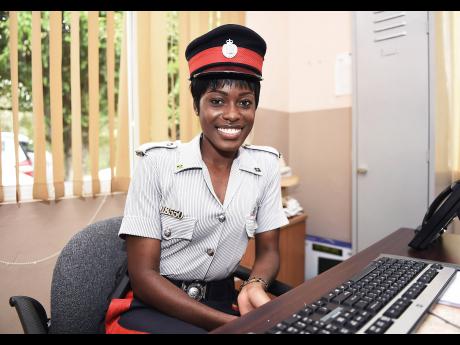 In all of its lengthy history, the final of the Miss Jamaica World contest has never paraded a serving member of Jamaica's security forces, but on September 23 it will.

Twenty-five-year-old Constable Sasha Henry has been given approval by the leadership of the 150-year-old Jamaica Constabulary Force (JCF) to strut her stuff on the runway as she seeks to represent Jamaica at the Miss World final in Sanya, China, in November.

Standing 5 feet 8 inches, Henry hails from the small community of Mountain Pass in Linstead, St Catherine, and is a graduate of St Jago High School and the Convent of Mercy Academy (Alpha).

She is now a final-year student at the University of the West Indies reading for a BSc in public policy and management.

Henry, who enlisted in the JCF on May 12, 2014, has an undying passion for public service and cites her decision to join the force as being "one of the best in my life".

She added: "I'm serving my country daily, protecting its citizens, and in so doing, reassuring them that Jamaica is the place of choice to live, work, raise families and do business."

The constable admitted that her love of service to the country has its roots in her upbringing, particularly the path chosen by her mother, a 23-year veteran of the Jamaica Defence Force (JDF),

"At one point in my life, I was living with her at the married soldiers quarters at Up Park Camp. All my summer jobs were at the JDF so I have always had that love for the whole uniform and law aspect of society, and I knew I wanted to be a part of such a noble institution."

Henry's love for pageants blossomed while she was in fifth grade in primary school. Then she entered and placed second in the Mini Miss York Street Pageant.

Though not active in beauty pageants since, Henry admired the contestants over the years.

A CHANCE TO UPLIFT JCF

This year, she was approached by a potential sponsor who, in complimenting her looks, advised her that as a police-woman her participation would be mutually beneficial to the pageant and JCF.

While initially sceptical, Henry said the opportunity to uplift herself and her organisation, which has faced a long-standing stigma of distrust, was too good to pass up.

"This has never been attempted before at this level and there are protocols to follow, so I was very iffy as to the approval being granted. However, nothing tried, nothing gained."

According to Henry, it was a surreal feeling when she was informed by head of the Police Area Five, Deputy Commissioner Derrick Knight, that Police Commissioner George Quallo had given the go-ahead.

Having hurdled that obstacle, the young constable has now declared that she's focused on changing the public perception of the JCF, and in so doing, making it a top choice for persons seeking employment.

"If successful, I would be a living testimony of what the JCF stands for - positivity and transparency. As I would be away from my normal duties for a year, it would allow me to enter into communities, and in so doing, stimulate charitable events and programmes that would spur a direct form of community-based policing that would aid the country, all while enhancing the image of the police force," said Henry.

(EDITOR'S NOTE: An earlier version of this story, due to a typographical error, inaccuratedly reported Constable Sasha Henry's age as 20. Henry is in fact 25 years old.)