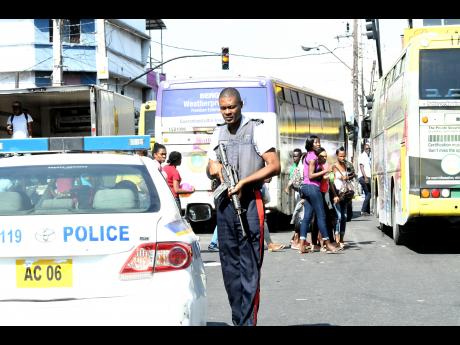 Norman Grindley
Norman Grindley/Chief Photo Editor Police on patrol in downtown Kingston yesterday despite the 'sick out' by some of their colleagues. 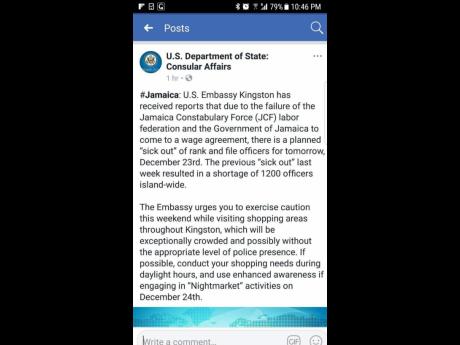 Several police divisions across the island were reporting an unusually high number of rank-and-file members calling in sick yesterday, prompting fears that the cops have stepped up their protest over the Government's failure to make them an improved wage offer.

There was no official word from the Police High Command up to press time yesterday, but the sources said meetings were being held to implement measures to patrol the streets and market districts going into tomorrow, Christmas Day.

When our news team visited downtown Kingston yesterday afternoon, cops were seen on foot patrol among the scores of vendors and shoppers in the busy market district.

Earlier this month, some 1,200 rank-and-file cops called in sick despite claims from the Police Federation, which represents them, that there was no organised sick-out.

As reports surfaced last week that the cops could call in sick over the Christmas period, National Security Minister Robert Montague urged them not to do so.

Having heard similar report, the United States Embassy in Kingston issued an advisory to Americans in the island to exercise caution while visiting shopping areas and to use enhanced awareness if engaging in 'nightmarket' activities.

The rank-and-file cops are upset over the failure of the Government to offer them more than six per cent increase over two years. Officials of the Police Federation met with Montague last Friday and have requested a meeting with Prime Minister Andrew Holness.