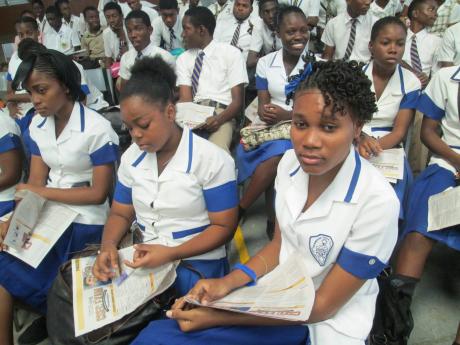 News that Jamaica will continue to lobby the Caribbean Examinations Council (CXC) to award grades for six subjects initially classified as 'ungraded' is being welcomed by affected students of the Penwood High School in St Andrew.

The samples of the students' School Based Assessments (SBAs) in six subjects they sat in this year's Caribbean Secondary Education Certificate (CSEC) exams were not submitted by the July 31 deadline and the council awarded them ungraded in the results released on August 16.

Evening-class student Sophia Thompson said when she checked her results, two of them - office administration and principles of business - were tagged 'ungraded', a situation that has now left her "distraught" after finding out that her SBAs were not submitted.

"I'm not willing to do any resit. I noticed that CXC didn't make a definite decision. It is the principal who is throwing it out there that the school will cover resit costs and my concern is, why is she throwing that out there?" Thompson said.

"I submitted my SBA on time," she said, noting that she only learnt of the situation when The Gleaner broke the story last Thursday.

"I didn't even know the school had a meeting. Nobody contacted me."

Thompson told The Gleaner that the education ministry should work to ensure that the CXC reverses its decision and awards grades in the affected subjects.

Noting that she had plans to seek further qualifications, Thompson, who is from Portmore, St Catherine, said she empathised with the younger students.

"I did well. It was gruelling, but I pushed. What about the young people who want to go to sixth-form or college? Their future is in front of them; they need to get their grades."

Thompson earned a grade one in English language and grade two in human and social biology and principles of accounts.

Another student, who requested that his name not be published said, "It is difficult to accept because to find the time is hard, and then when you do, to now learn about this, it is heartbreaking."

One parent, Oneifho Goode, said his daughter who sat the social studies and principles of business exams in June has been left distraught.

After the story was made public, Minister of Education Ruel Reid announced that the Government would be lobbying the CXC to change the ungraded scores because the students were not to be blamed.

However, CXC's Assistant Registrar Cleveland Sam said on Friday that it was unlikely that the grades would be reviewed "as CXC cannot be seen as breaking its own rules".

Penwood principal Donna McLaren had explained that the school experienced problems when they tried to electronically submit the SBAs, and they did not submit the physical copies. However, Sam said CXC could not be held liable unless the school could produce electronic receipts to show that the documents were successfully sent to the council.

Sanmerna Foundation gives students cash grants for CXC subjects
Jamaica to lobby CXC for Penwood students' grades, but it could be in vain