Lisa blocked out! - Young MP vows to fight on after defeat 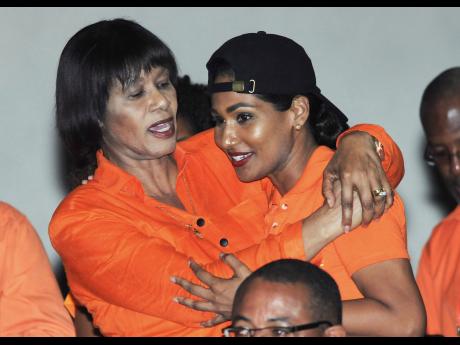 Jermaine Barnaby
The victor, Portia Simpson Miller (left), has a hug for the vanquished after the votes were counted at the People’s National Party’s internal poll yesterday.

People's National Party (PNP) delegates locked out Lisa Hanna from the leadership table as yesterday, she failed in her bid to become one of the party's four vice-presidents.

The slap-down reverberated across the length and breadth of the National Arena and beyond as Comrades said no to the brash young member of Parliament who had campaigned on a platform of renewal and rebirth.

Brown Burke later told journalists that she had planned her success on the work she has done and which, she believed, pulled her across the finish line.

"Certainly, my team and I have done a lot of work. We have gone across the island, listening to the concerns and issues raised by the delegates. I feel their pain. I understand where they want the party to go. I have given my commitment to being their voice where it matters most because the party was built on the backs of the ordinary people," said Brown Burke.

Returning vice-president Ferguson, who polled more votes than party president Portia Simpson Miller, said he was always confident, but he took nothing for granted.

"I am glad to be among the four. I believed that the work I did was enough as I have been across most of the constituencies. Where I wasn't in touch, I had people who were there. I believe that as a person and a politician, I don't seek friends only when I need them. For many, they have said my candidacy was easy, and so I was not a hard sell," a jubilant Ferguson said.

Arscott, who was considered to be the weak link among the contestants, finished with the third-highest number of votes.

"I had a great day. The party was on show. I always believed in the delegates, and they took me home. Now the work begins because the struggle continues. The rebuilding of the party begins now," Arscott told The Sunday Gleaner.

For McNeill, the second-time-lucky candidate, the delegates and supporters were on show and they did not let the party down.

"I have worked hard. My team has worked. I have covered this country back and forth. The few places I didn't know, I know now. We did all the work we could have done in an organised way. We hoped for the best, and the delegates brought me home," said McNeill.

"After every contest we go through a process of healing and unity, but the truth of the matter is, we will get through that process and do what we have to do - strengthening our party, revisiting our organisation, becoming a strong parliamentary opposition, and holding the Government accountable for the mistakes they are making," added McNeill.

Hanna, who put on a brave face and addressed the delegates after her defeat, said she remained energised and committed to the PNP.

"We ran a really good campaign. We did the work across the country, and certainly, we have no regrets. We brought some energy to the party. I believe that the programme of work we have set out we have achieved. We have no regrets about how we ran it. We ran a build-up campaign rather than a tear-down campaign. There were many challenges for me as a candidate in terms of the obstacles that were thrown in my way," Hanna told The Sunday Gleaner.

"I have demonstrated that I am a courageous candidate, and my principles and conviction will supersede any kind of dirty politicking," added Hanna, who was given a hug by Simpson Miller.

According to the PNP president, Hanna's time will come.