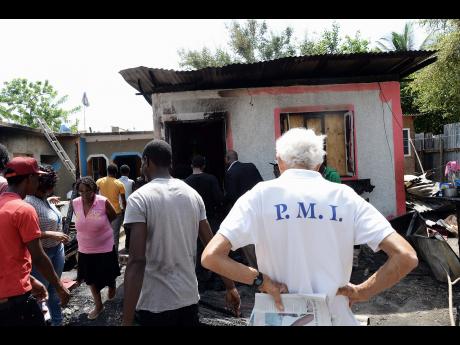 Jermaine Barnaby
Members of the Peace Management Initiative at the premises on March Pen Road yesterday, where five persons were shot and killed.

It would have been five dead children instead of three, if a 14-year-old girl who was shot 10 times had succumbed to injuries, and a five-year-old girl, who some persons say was deliberately spared by the gangsters had not been. The gunmen were reportedly wearing police vests, masks and sporting high-powered rifles.

Two of the children killed, according to a family member who requested that his name not be used in this story, were murdered execution style. He told The Gleaner that the two children aged nine and 14 years were tied up by the hoodlums and then shot.

He said the little girl who was spared from the attack ran and hid until the smoke cleared. Everyone thought she was among the rubble, dead, but she survived.

The family member recounted the events he experienced leading up to the ordeal. He was a few metres away when it happened.

"You hear like dem a kick off di gate. When dem kick off di gate, you hear explosion, [shots] firing non-stop and a bare people a scream. So mi come out fi look if a police. When mi come out and look, mi see dem inna police vest. Some a dem have on mask, some a dem don't. When mi come out, dem see mi and fire shot, [but] mi escape. Bout 15 to 20 a dem. All in a mi mind, mi a try come to the screaming, but mi couldn't because it was a lot of them and dem a fire shot. After the shot dem start fire, mi come round come see mi family dem pon di ground a burn up and some a dem a scream same way," he said.

Petrena Hansel, mother of the 14-year-old girl who survived, told The Gleaner that one side of her daughter's body is now paralysed.

"Dem nuh have nuh heart, a dat me know. When dem kick off di door, mi know dem see the two-year-old pon di bed. Dem coulda save the two-year-old, too. Dem gone already suh we just affi think bout dem funeral. Nobody nuh have nothing good fi seh bout it (the incident), everybody feel it, down to the police feel it," she told The Gleaner.

A curfew that was ordered since Sunday was in full effect yesterday. Lawmen and soldiers were busy setting up and manning barricades at different spots through the community. The police were on patrol stopping and searching vehicles and civilians.

The Peace Management Initiative had a team in the area, giving support to the family members of the victims.

Meanwhile, the Cabinet discussed the matter yesterday, and Prime Minister Andrew Holness said he was deeply saddened by it.

"A gruesome murder was committed. The killings must end. The Government is now even more resolved to dismantle the gangs and bring those responsible to justice," Holness said.