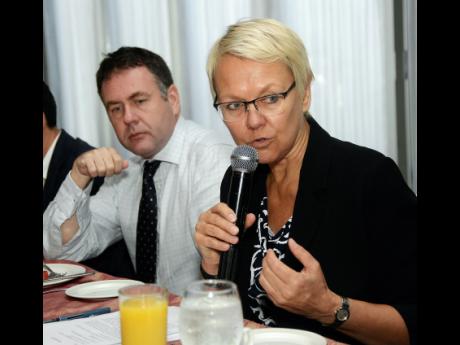 Local artistes and business leaders want the Government to urgently pursue the possibility of visa-free trips to Europe's Schengen countries, although the European Union's (EU) top diplomat in Jamaica has suggested that the timing might be problematic, given recent moves to tighten borders in the EU in the face of its refugee crisis.

"It is a fact that considering the challenges that Europe is facing with its borders at the moment, this may not be a good time," said Malgorzata Wasilewska, the head of the EU mission to Jamaica.

Wasilewska suggested that Jamaica failed to act when a deal might have been easier, but didn't rule out the possibility of a Schengen-Jamaica travel pact if Kingston applied for such a deal - just that the process is complex and time-consuming.

She explained: "The country has to fulfil certain conditions, submit an application then it is processed in Brussels (EU headquarters). It is, of course, a long process, and then a full waiver can be granted."

Named for the Belgium town where it was signed three decades ago, the Schengen agreement removes border controls between 26 European states. But important for countries outside the Schengen region, entry to one country with the visa allows travel to the others.

But the waiver protocol, such as was signed last year between the Schengen group and the Caribbean countries of Dominica, Grenada, St Lucia, St Vincent and the Grenadines, and Trinidad & Tobago, enhances that arrangement,

For instance, under that agreement, nationals of the Eastern Caribbean countries can travel to Schengen area for a stay of up to 90 days within any six-month period, without requiring a visa, as long as the purpose of the visit was not to carry out a paid activity.

This kind of easier movement, although not specifically a part of it, would be seen as complementary to the Economic Partnership Agreement (EPA), a free-trade pact between the CARIFORUM countries (the Caribbean Community and the Dominican Republic) and the EU.

Jamaica's advantage under the EPA is considered largely trade in services, and easier access to Europe under a visa waiver scheme would be seen as expanding the opportunity to explore more markets.

"I'm surprised that we don't have it. I thought we actually did," said Dennis Chung, chief executive officer of the Private Sector Organisation of Jamaica.

"I think it's something that we definitely need to have. It makes it easier for people who want to do business overseas, in Europe. I'm sure it's going to be a lot less costly than individual application."

Chung added that with Brexit, there's an even greater need to build trade relationships with the rest of the EU, and Jamaica applying for the visa waiver could help the process.

Efforts by The Sunday Gleaner to get an official word from the Ministry of Foreign Affairs and Foreign Trade on why Jamaica has so far failed to apply for easier access to Europe were unsuccessful last week, as Minister Kamina Johnson-Smith was off the island and officials from the previous government refused to comment.

But Lydia Rose, managing director of the Jamaica Association of Composers, Authors and Publishers (JACAP), said she's aware of discussions at the Caribbean Community (CARICOM) level.

JACAP is a non-profit copyright collecting society that manages performing and recording rights in creative works for its more than 3,000 members.

According to Rose, getting the visa waiver, and on favourable terms, would be a major step in helping artistes spread their work while increasing their earnings.

"For our members, it would be extremely important to them. It would ease all the obligations, and especially for those creators who are not well known, it would actually help them in how they grow in their business. Europe is our biggest market, especially for reggae.

"It is easier to get to Europe in terms of a visa than getting a United States (US) visa to go and work. The US will give you a visa but not a work permit, and you cannot work on a visitors' visa so, therefore, Europe for us is one of our key and important markets."