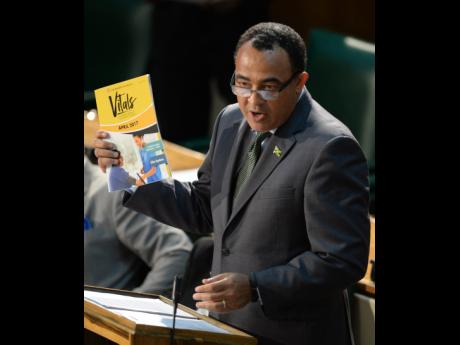 Jamaica's health sector is to undergo a major overhaul in the next two years, with the Government sourcing $3.5 billion from the National Health Fund (NHF) to repair, replace, and upgrade critical infrastructure across the country.

The hospital was faced with a crisis earlier this year as noxious fumes from the air conditioning unit severely affected both staff and patients at the institution.

All outpatient services have been relocated, and up to 600 patients are receiving medical care from other locations while the main building is being investigated and repaired.

Tufton, in his contribution to the Sectoral Debate in the House of Representatives yesterday, said that the money taken from the NHF would not affect its viability. He pointed out that the fund has $10 billion in reserves, and a government-commissioned KPMG study has shown that with a withdrawal of $3.5 billion, the entity would be able to meet its obligations for up to 10 years, all other things being equal.

"What is important is that we cannot continue to limp along with an ailing infrastructure and pretend that we are able to respond to the health challenges our people face. We have to do something, and we have to do it now," Tufton asserted.

He noted that given pending reforms, the ministry was "comfortable" that the revenue streams would be improved.

The health minister also reported that the Government was working to complete plans to establish a national health insurance scheme (NHIS) by year end.

"We are now in the process of recruiting another internationally experienced consultant who will work with the committee that has been established to drive the deliverables of an NHIS," Tufton said.

While indicating that the Government had no intention of reversing its policy of universal access to health care for all Jamaicans, Tufton noted that Jamaicans should contribute to their health costs if they are in a position to do so.

- Technical scoping work to be done at the Spanish Town, St Ann's Bay, and Mandeville hospitals with a view to upgrading them from Type B to Type A.

- Technical scoping work on May Pen Hospital to upgrade from Type C to Type B.

- The commissioning, by June this year, of the Linear Accelerator (cancer treatment centre) at the Cornwall Regional Hospital, and by first quarter of 2017, a similar facility at the St Joseph's Hospital.

- Construction of the Ministry of Health's corporate headquarters - public-private partnership.

- Begin construction of the children and adolescent hospital in western Jamaica - gift of the Chinese Government, but the Jamaican Government will bear some preliminary costs.

- Collaborate with the University Hospital of the West Indies to develop a centre of excellence.