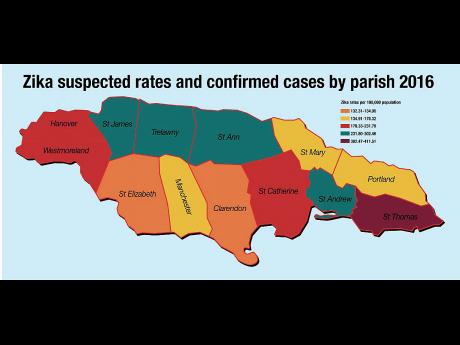 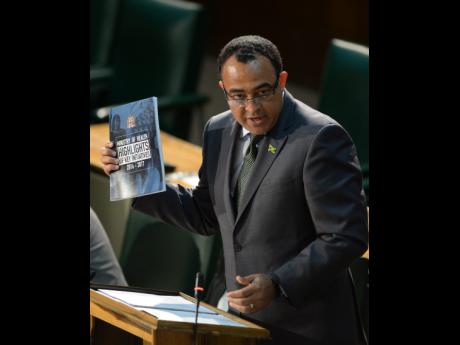 With residents of Portmore, St Catherine, reporting an increase in mosquitoes in recent weeks, the Ministry of Health is urging Jamaicans not to drop their guard against the pesky insects which have been spreading the Zika virus (ZIKV) across the island since last year.

Having peaked in June 2016 with over 600 suspected cases of ZIKV infections, the number of reported cases has gradually decreased, but Chief Medical Officer Dr Winston De La Haye is warning that "it is not a matter of if, but a matter of when" there will be another Zika outbreak.

"Based on public health principles in about four to five years, there could be a re-emergence (of Zika)," De La Haye told The Sunday Gleaner.

"Gone are the days when you just put on your clothes and go to work. At this time in Jamaica, we must wear some kind of mosquito repellent and ensure we are doing our best to reduce our exposure to mosquito bites," said De La Haye.

"We now recognise that we are endemic to Zika, so at all times now we would be prepared for the possibility that people could be infected by Zika hereafter and forever; similarly to dengue and chikungunya.

"They are working on something for dengue and Zika, but there is no vaccine so far."

De La Haye explained that persons who have been previously infected would have developed immunity and are unlikely to contract the virus again unless it mutates and comes back as a different strain.

Persons who have not yet been infected and babies who will be born in the next five years will, however, be at risk.

In recognition of this, De La Haye said sustained efforts in vector control and specifically mosquito control are required.

In an effort to achieve this control, the health ministry has collaborated with the University of the West Indies and other bodies to launch a mosquito control and research unit.

The unit, which includes an entomologist, will, among other things, test to see if the mosquitoes are becoming resistant to the sprays being used against them.

De La Haye is also imploring Jamaicans to take individual responsibility, as "the major contributors to the breeding of mosquitoes are the drums in the homes of persons that they use to store water".

It was revealed in Minister of Health Christopher Tufton's sectoral presentation last week that St Thomas had the greatest number of cases of ZIKV infection per 1,000 members of the population, followed by Trelawny and St James.

Tufton later told The Sunday Gleaner that the infection rate across the island has been reduced dramatically with a combined total of close to $1 billion having been spent to combat the epidemic.

The latest figures coming out of the Ministry of Health show that there were 10,061 notifications of suspected cases of ZIKV recorded in Jamaica between January 2016 and May 1, 2017.

Of that number, 7,744 or 77 per cent were determined to be suspected cases of ZIKV, with 203 confirmed cases of the virus.

The number of confirmed cases could, however, rise with the introduction of official testing methods.

"As things stand now, there is a specific test that we use, but there is still no FDA- (Food and Drug Administration) approved test," De La Haye explained.

"For that reason, what we do is keep the samples of the suspected cases for three to five years; so let's imagine next year they come up with a more sensitive test, we would have the samples to go back to."

Among the total number of ZIKV notifications received by the health ministry, there were 827 pregnant women with 698 suspected cases of ZIKV, of which 78 were confirmed.

There were also 181 notifications received regarding babies suspected of congenital syndrome associated with ZIKV (CSAZ). Fifty-one were classified as suspected cases of CSAZ-46 microcephaly, 35 non-serve, 12 serve and three probable cases.

According to De La Haye, every baby born with microcephaly since 2015 has been tested for ZIKV, but there have been no confirmed cases directly linking the birth defect to the virus.

He pointed out that testing of all microcephaly babies will continue, while steps have been taken to assist mothers of babies with the birth defect.

"We had an expert group that met over a couple of months looking at how to address these children (microcephaly)," De La Haye shared. "We identified the need for specific testing that could be required, and actually started a fund of $50 million, because some of these tests are only available privately and not in the public hospitals."