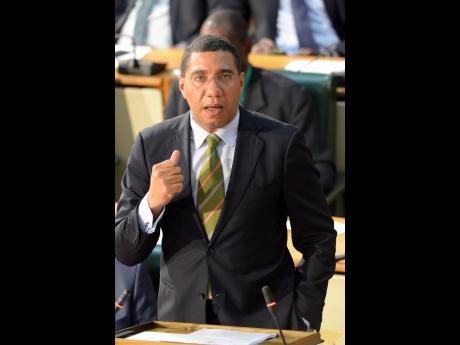 Opposition Senator Lambert Brown tabled questions in March about the costs and number of trips for the period under review. Yesterday, Information Minister Ruel Reid gave the overdue answers in the Senate.

Three of the prime minister's visits were to the United States, with the total cost of the overall trips being US$98,953.89.

Reid insisted that the trips, mostly for conferences, were "in order" and Jamaica got what he called "great benefits".

The prime minister visited Morocco for a climate change meeting, and The Bahamas, where he attended the grand reopening of the Sandals Royal Bahamian and Spa Resort.

Approximately US$19,150 was spent to cover the attendance at the 2016 Olympic Games in Brazil. That trip included a stop in the Dominican Republic, which was not in the answers tabled and which led Brown to question if other trips were left out.

However, Reid said there were no more omissions.

According to the information presented, the delegations accompanying Holness mostly consisted of one advisor, a security officer and an assistant.

However, opposition member K.D. Knight said other government technocrats must have accompanied Holness to the many conferences and the costs would be required as well.

Reid first argued that other technocrats would not fall within the prime minister's delegation, but later indicated that he would be willing to get the cost for other persons who represented Jamaica on those trips.

Politicians on both sides of the political divide in Parliament use overseas trips to attempt to highlight government waste, but analysts have said it's difficult to assess their benefits.

When Portia Simpson Miller last served as prime minister, Holness as opposition leader, tabled similar questions and suggested that the then government was not being frugal.

The full cost of trips Simpson Miller took during her 2012-2016 time in office is not available, but she went overseas more than 20 times during the first two years.