On the corner | Duncan determined to lead EPOC success 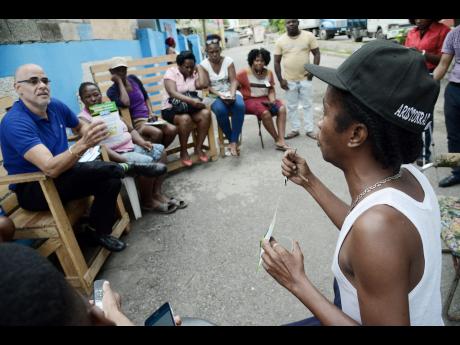 Keith Duncan, co-chairman of the Government's Economic Programme Oversight Committee (EPOC), told residents of Swallowfield in St Andrew that he was determined to lead the charge for the success of the plan of action that hopefully would rescue Jamaica from further economic ruin.

Duncan, who heard residents insisting on a right to be heard in any plan for their community, told them that, like him, they should be committed to making the plan work for the betterment of Jamaica.

"To have oversight means that you hold the Government - any Government - to do what dem supposed to do. And so we are here to make sure that the Jamaican Government is following the economic plan. That is the job of the EPOC. So I, along with my team, decided that I don't just want stay on TV. I want to come to places like Swallowfield and other communities to take the plan to the people," Duncan told residents who had come to Annie's Bar in the community for the second of EPOC's On the Corner series.

Duncan was continuing the EPOC scheme of taking details of its work to residents on street corners across the island. EPOC, which has been accepted by the International Monetary Fund, is a demonstration of the Government's commitment to fiscal responsibility.

"So we come with the plan so that the people can be engaged around the plan. This plan is reviewed every year. It is the plan. It's the only plan. It's Jamaica's plan. It's a plan to maintain fiscal responsibility. And I am determined to make this plan work with the team we have. I live here and I work here. So this plan is about how to make Jamaica better - the place is live, work, and raise families," Duncan implored the gathering.